In the haste to produce my list of Nine 90s Movies Way Ahead of Their Time, I overlooked one of my personal top-5 favorite films in order to make way for others that deserved some recognition. Fortunately, May 2017 marks the the 20th anniversary of Luc Besson’s visionary masterpiece The Fifth Element. Set in a vibrantly colorful future where alien species from around the galaxy coexist in relative harmony, an ancient evil awakens and threatens to extinguish all life in the cosmos. On Earth, a retired general turned taxi driver must team up with an unlikely crew of heroes to fulfill an ancient prophecy and save the world. 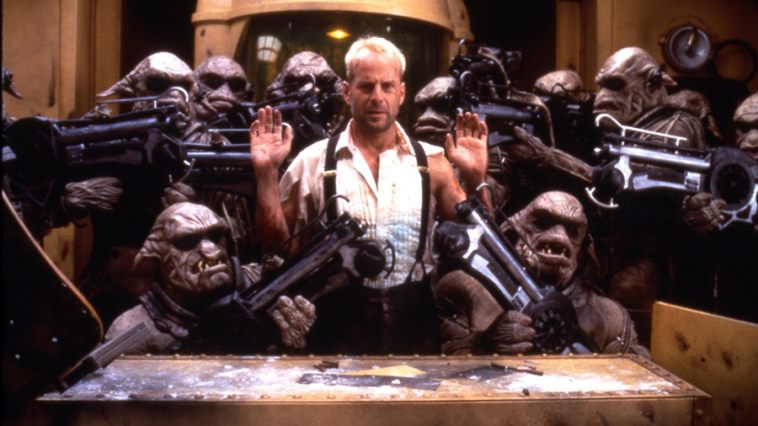 Despite Bruce Willis’s traditional, albeit quirky, portrayal of Korben Dallas, many of the film’s themes and characters were far beyond their time. At the forefront of those was Chris Tucker’s character Ruby Rhod, the host of an intergalactic radio show. Rhod was an incredibly flamboyant and outspoken character known for his lavish costumes and abundant sexuality, but what made his character unique for 1997 (and even for today quite frankly) was his gender ambiguity. While his moniker is blatantly suggestive and much of his behavior throughout the film could be described as a cliched example of masculine virility, the character dresses in custom designer fashion and acts like female divas that we have become accustomed to in recent years. The sheer rejection of gender norms in a highly featured role, a role in which the character was arguably the most popular celebrity in the fictitious galaxy, was certainly a glimpse into the future by Besson. 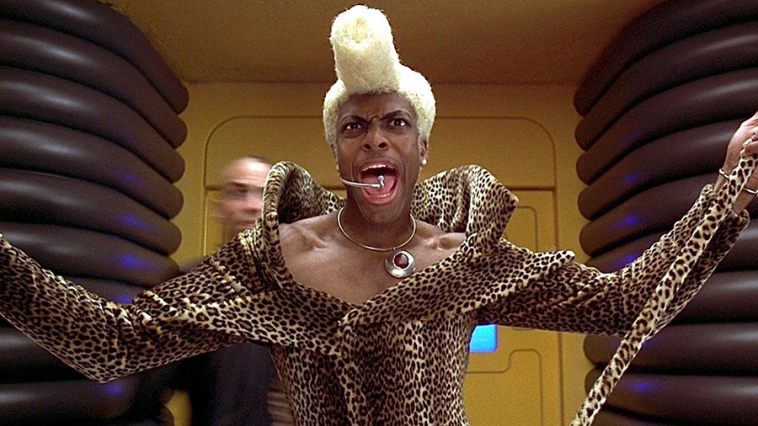 In addition the film features not only a strong female hero, but basically a female deity. An ancient alien in her own right, Milla Jovovich’s character Leeloo is the rare female christ figure. From her resurrection story to the savior/protector role and several occassions where her body is literally posed like a cross, Leeloo was a character traditionally reserved for men. In addition to the religious character background, there is power in her sexuality that commands respect from the men in the film and Jovovich’s comfort with nudity played well. There is a level of worship among the males in the cast who witness her in the nude, further deifying the character. By film’s end, Willis is still essentially the hero who gets the girl he’s been in love with but the character was anything but the damsel in distress that occupied much action fare of that time period.

The idea of globalism was heavily featured in this film as well. Long before social media, or even the internet, Besson envisioned a global economy and a free world with a black president played by Tommy “Tiny” Lister, of Friday fame. Not much for eloquent speeches, Lister was still a very powerful figure on screen and character who was still relatable.

With flying cars, spaceships, and floating orbital cruiseliners there is plenty that didn’t come to fruition. However, one thing that Besson nailed was the birth of Auto-Tune. During a sequence in the later portion of the film, the Diva Plavalaguna performs an opera (sung by Inva Mula) in which her voice in amplified and manipulated to create inhuman pitch and range. In this fiction, the opera is the hottest ticket in the galaxy and the piece evokes a wide array of emotions from its diverse fan-base. I think it’s safe to say Besson and his creative team were definitely onto something as Auto-Tune rapidly spread across the music scene nearly 20-years later. 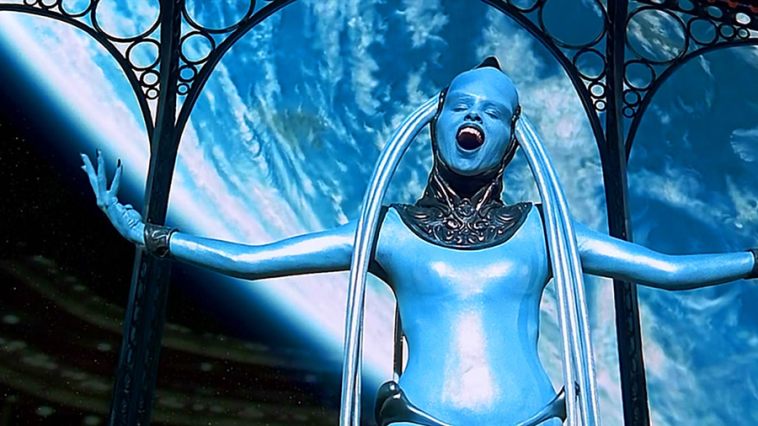 All of the aforementioned aside, The Fifth Element is truly a one-of-a-kind movie. The cast is loaded with talent like Bruce Willis, Gary Oldman, Milla Jovovich, Ian Holm and Chris Tucker just to name the primary players.  It’s Sci-Fi spectacle meets 90s action thrill ride loaded with laughs. If you have never seen it, give it a chance. Catch the limited 20th anniversary engagement in theaters on May 17th.