While the rest of the known universe was busy crashing Netflix, binge watching the new Luke Cage series, I was patiently waiting for HBO to debut its new series Westworld. I wanted to write this directly after watching the premiere episode on Sunday, but decided to wait and let my subconscious absorb all the detail it could. I actually went back and watched it a few more times. Partially to scout for things I may have overlooked but mostly because I thought it was damn good.

I had been highly anticipating this debut for over a year. Early teasers were more than enough to spark my interest and HBO has continually shown they can produce a quality far beyond the capacity of network or basic cable television. If I didn’t know any better, I’d say Westworld was made just for me. A science fiction western with a loaded cast, a mysterious plot, all the violence I’ve come to expect from westerns and plenty of gratuitous nudity to round it all out. For the record, both the nudity and violence swing both ways in this show.

The cinematography is exceptional. Natural beauty of the landscape speaks for itself and the sets are well designed to take full advantage of it. Jonathan Nolan did a fantastic job directing and really got some strong performances from his cast in the first episode. Michael Crichton did much of the co-writing work with Nolan and the script wonderfully paced, revealing just enough while beginning to paint a much larger mystery that will be solved throughout the season. Crichton wrote and directed the 1973 film of the same name (which I’m a bit embarrassed and ashamed to admit I was completely unaware of before this show was on my radar) which the series is based on, so his involvement should help keep the integrity on track. Ramin Djawadi’s score is right on point and the music for the opening credits sequence is both beautiful and haunting. The perfect embodiment of the show’s dual nature.

For those who haven’t seen the show yet and want to go into the first episode with a completely blank slate, I don’t blame you but I’d stop reading if I were you. For everyone else, I’ll still keep the details as minimal as possible. That way I can provide a general overview and possibly spark someone else’s interest without spoiling all the surprises, although any other synopsis of this show will go ahead and divulge mostly everything.

Westworld itself is a theme park, set in the old west (or at the least an environment reimagining the old west), where those who can afford it pay for the chance to live out their fantasies. As a big fan of westerns, fantasy is a major factor in the appeal (it’s the primary reason I logged countless hours playing Red Dead Redemption and its expansions). There is just something about that setting that has a certain charm. Lawlessness, debauchery, drinking, gambling, prostitutes and shootouts. What’s not to love?

The park is home to the “hosts” who are responsible for the ambience and stories that constitute the full immersive experience. “Newcomers” are the clientele. They head to the park in order to blow off steam and enjoy the chaos that is severely lacking from their lives. The audience is first introduced to Dolores (Evan Rachel Wood), a host who is at the center of a much larger picture. James Marsden plays Teddy, another host, who is engaged in a cyclical love story with Dolores. I get the feeling that their relationship will begin to shape the narrative for change as the series progresses. Before too long we get to meet The Man in Black, played awesomely by Ed Harris. A newcomer, but he’s anything but new to the park. There is a bigger game afoot in Westworld and he has spent 30 years playing the game looking for the answer. 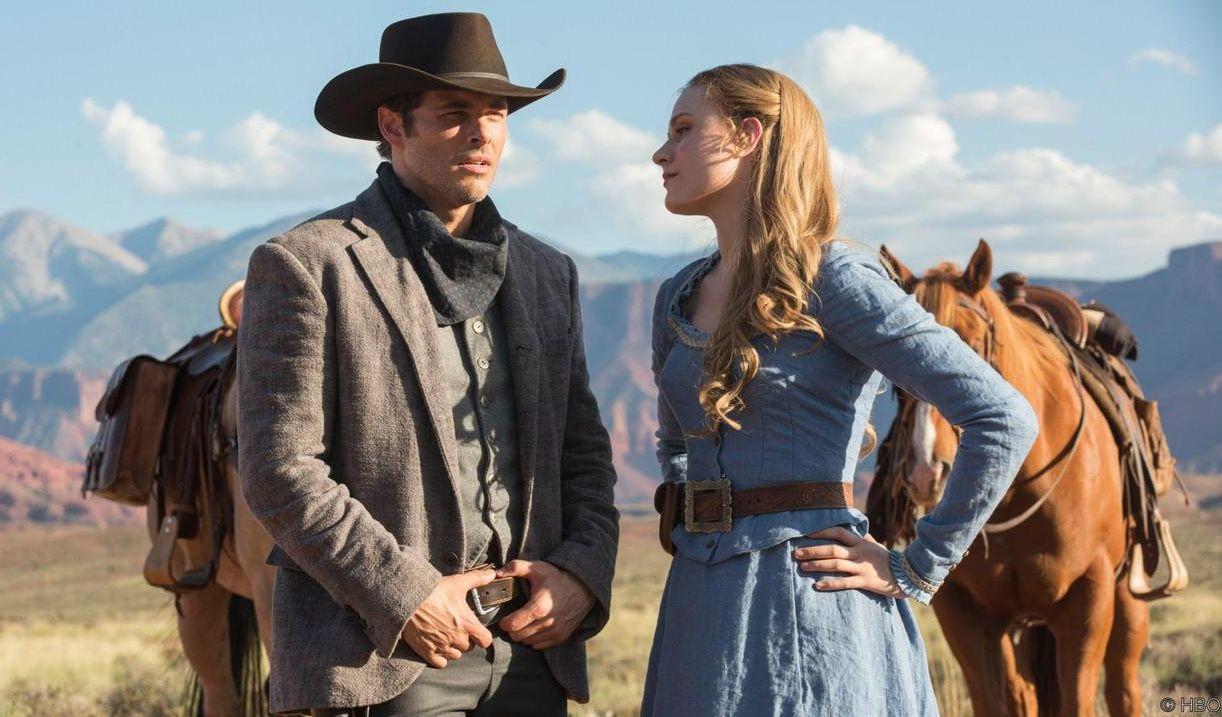 Westworld also has a team of designers and engineers working behind the scenes to ensure the best, most immersive experience for their clients. Anthony Hopkins plays Ford, the creator and architect of Westworld. His vision shapes the environment and its cast of characters. We come across him in the dark, talking to one of the park’s first hosts, apparently yearning for the past. As his creation trudges onward, his adjustments may end up causing more harm than good for the hosts and newcomers alike.

As the first episode comes to an end, a slew of hosts have begun to act erratically. Ford and his team struggle to limit potential liability down the road and The Man in Black has kidnapped a host in order to gain information. Dolores’s father, Peter Abernathy (played by Louis Herthum), discovered a photo left by one of the newcomers and began to ask questions he shouldn’t. His confrontation with Ford at the end is particularly chilling and well acted, setting the table for upcoming turmoil. Foreshadowing throughout the first episode is abundant and well played. Dolores reveals what her father said to her, “these violent delights have violent ends.” A quote from Shakespeare’s Romeo and Juliet recited both in the series trailer and at the end of episode one. Shakespeare, or at least his work, look to play an important literary role in this show down the line as he was referenced more than once in the series premiere.

As I mentioned earlier, gratuitous violence is part of the show and more accurately a large part of the newcomers’ experience. The quote seems poignant in a roundabout sort of way, just as Abernathy tells Ford of forthcoming vengeance and points out the sins Ford has committed are coming back to haunt him. I also mentioned I thought the show was made just for me, now while I know that probably isn’t the case, the choice of Johnny Cash’s Ain’t No Grave as the song that plays over the end credits only serves to reinforce my delusions.

I will check back in around the mid-season mark to see how the show has progressed and where it looks to be heading down the final stretch. At the end of the season I’ll wrap it up as best I can and look towards what I hope will be a long run for this series. Take a look at the teaser trailer below if you haven’t yet seen it, just keep in mind it will reveal more than I have. The subsequent trailers reveal much more.

Recommendation: Watch it. Love it.