Check Out My Latest Reviews

Maybe it’s just me, but 2017 felt like a year loaded with more period pieces than usual. In fact, six of the nine Best Picture candidates are period films. Even more remarkably, two of those films actually focus on the exact same period during World War II. Over the summer Christopher Nolan released his 70mm epic Dunkirk which focused a small group of British soldiers looking to escape the French beach. Just in case you were wondering what was going on back in England, Darkest Hour serves as something of a companion film and takes a look at the diplomatic efforts of Winston Churchill and members of Parliament.

Director Joe Wright is no stranger to period pieces and that’s arguably his sweet spot as a filmmaker (Atonement, Pride & Prejudice). He has a certain stylistic flair that breathes life and energy into films, that on the surface, may seem rather boring. That was on display once again, taking the drab and ominous tone of Nazi-era Europe and creating a much more energetic spirit of resistance in the face of darkness. However, it’s not without its lulls as the opening third of the film is a bit of a snoozer. Once the second act was underway there was plenty of momentum and the stakes were much more clearly defined, reinvigorating a sense of historical importance from the audience that carried the film through to the end. Wright’s decision to peg Churchill as  slovenly and decrepit may not do the man justice in the context of what he accomplished as a leader during one of the worst times in modern human history, but the portrayal is only a depiction which spans a few weeks.

Regardless of how the character was designed for the screen, it’s inarguable that Gary Oldman did a marvellous job. There are very few actors who could have pulled of this kind of transformative role with such smooth efficiency, but Oldman has made a career out of his remarkable diversity. Aside from adopting the challenging dialect and cadence, the role required the use of significant prosthetics to transform to veteran actor’s appearance. That in and of itself requires a special kind of patience and particular talent to make the audience suspend their disbelief, knowing full well that the man they see on the screen isn’t the actor they know behind the makeup. Navigating that ether is not always easy, but Oldman did a fantastic job as always. He rightly received an Oscar nomination for Best Actor, but his wasn’t the best performance I saw last year.

From a narrative standpoint, the second most prominent character in the film was Churchill’s secretary, Elizabeth Layton, played by Lily James. The introduction of the character serves a two fold function. Firstly, she gives a contemporary audience a filter to view Churchill through and secondly, she provides a female perspective in a space that was exclusively occupied by men during that era. In that part, James showed far more depth and well roundedness as a performer than in her role as the de facto damsel in distress in Baby Driver. Acting alongside Oldman, and in one of the Best Picture nominated films, surely provided her with a wealth of experience that she’ll parlay into future roles. 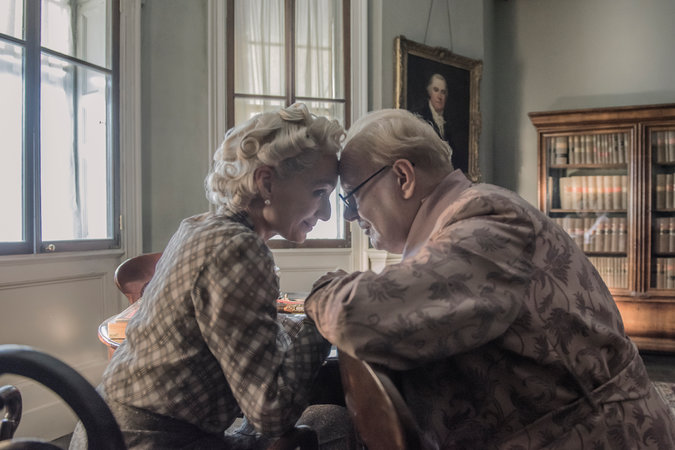 Ben Mendelsohn and Kristin Scott Thomas lent their substantial talent to the project in key supporting roles as King Henry VI and Churchill’s wife Clemmie, respectively. You may remember Colin Firth’s emotional rendition of King Henry from The King’s Speech, but Mendelsohn’s approach was a far more cerebral one. Serving as a tertiary character in the story, unsure of his own position or responsibility, his measured and calculated dialogue lands with significant impact. His conversations with the Prime Minister shape the direction of the British war effort and paints portraits of two men attempting to constructively use power they were thrust into. Mendelsohn’s been a hot commodity since his wonderful turn as the villain in Rogue One and it’s easy to see why. Helping to illustrate the softer side of Churchill, Thomas serves as confidant, friend and partner to one of the most influential characters in the history of western civilization. Without their relationship, both characters lose some humanity and, ultimately, sympathy from the audience. Thomas brought just the right blend of humor and wit to the table.

Much of the film’s success with character dynamics belongs to Anthony McCarten who wrote the screenplay. This could have easily fallen by the wayside if the script was less personal. It was a wise choice to root the World War II story in a handful of characters dealing with it on a personal level, especially in stories where the outcome is known. Drafting this to be a character driven narrative enriched the whole experience and allowed the audience to find things to cheer for.

Dario Marianelli composed a strong original score to intensify the emotional tones and bridge the gap between some of the less visually entertaining sequences. This wasn’t a war epic, but it was set during the war, and communicating particular levels of both fear and hopefulness were crucial to the film’s overall cohesion. Sarah Greenwood came together with Wright once again to craft the production design with Katie Spencer. Authenticity always goes a long way, but even more so in a period film. Symbolism works well when it works well and this was visually a very dark production, reflecting the impending Nazi threat engulfing Europe. It’s not much of a surprise to see the pair nominated for Best Achievement in the category. Director of Photography Bruno Delbonnel utilized that aspect well and gave the movie a level of claustrophobia which reinforces the idea that the proverbial walls were closing in on Great Britain at that time. 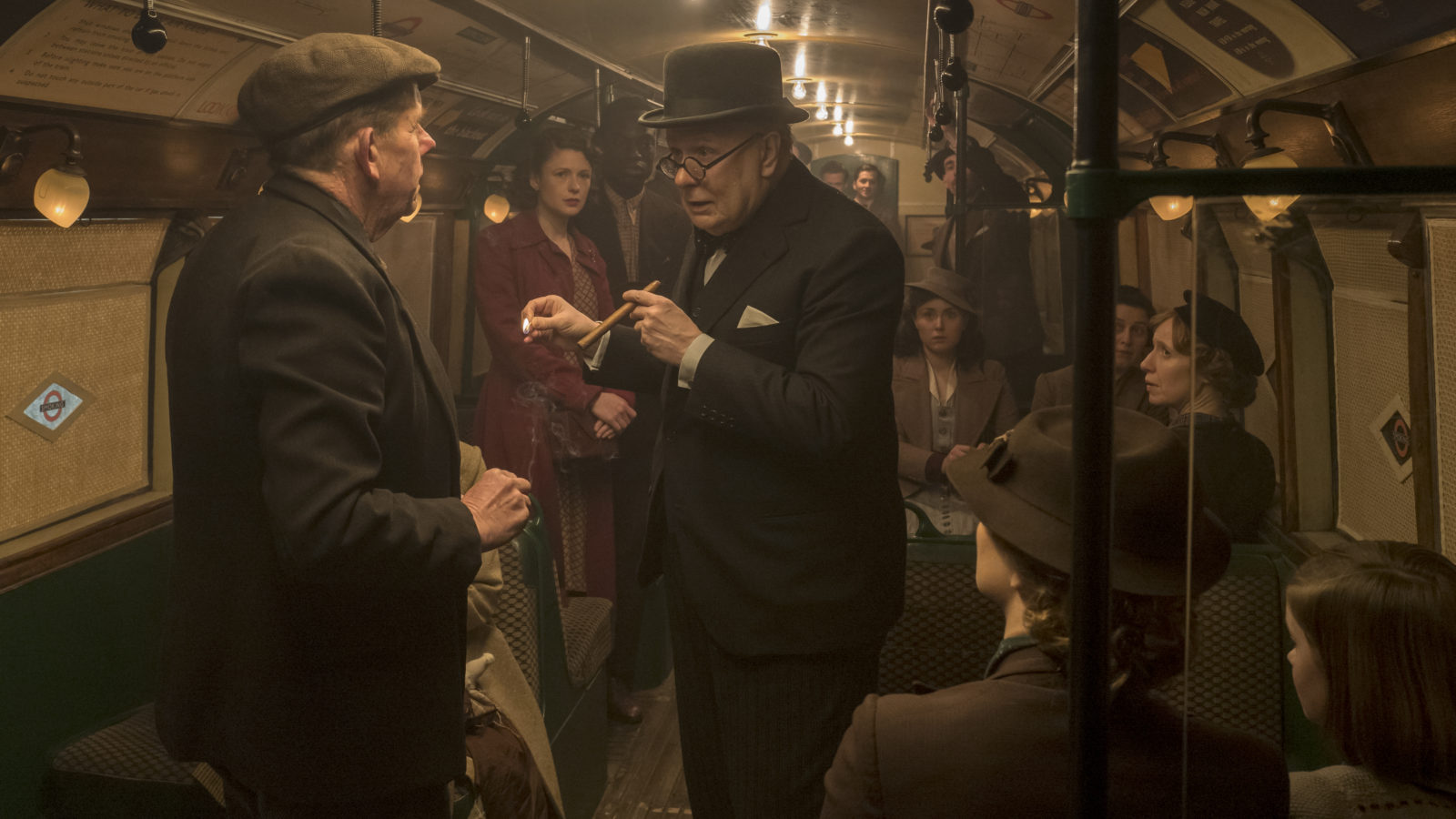 There are two schools of thought when taking in a film like this one and it’s fair to say I experienced them both. Early on, it was difficult to stay awake as there is a slow build to any substantial conflict. The political landscape of England at the time was filled with infighting and backbiting which came across as boring, regardless of its significance. Once the pace found its footing and the real meat of the story was underway, the film became significantly more enjoyable. By the time the credits rolled, it was much easier to recognize this as one of the year’s best films. Even though it found its way into the Academy’s nine nominees for Best Picture, I don’t see it as one of the top five.

Recommendation: If you enjoy history, or at least period films based on history, then this one has all elements of strong filmmaking. There’s no question that it’s going to resonate with an older audience, but so be it. Gary Oldman’s performance was enough of a sales pitch for me, and maybe a strong all around film will be enough for everyone else.