It just wouldn’t be awards season without at least one politically charged or socially motivated film in the mix. In the case of Steven Spielberg’s latest, The Post, we get both. And in a time of significant political turmoil, this movie is a colorful reminder of how history repeats itself. Set against the backdrop of the Nixon administration, this film examines the individuals at the Washington Post fighting in defense of the first amendment. More accurately, against the overreaching grasp of the White House and its efforts to prevent the publication of the leaked classified documents known commonly as the Pentagon Papers. 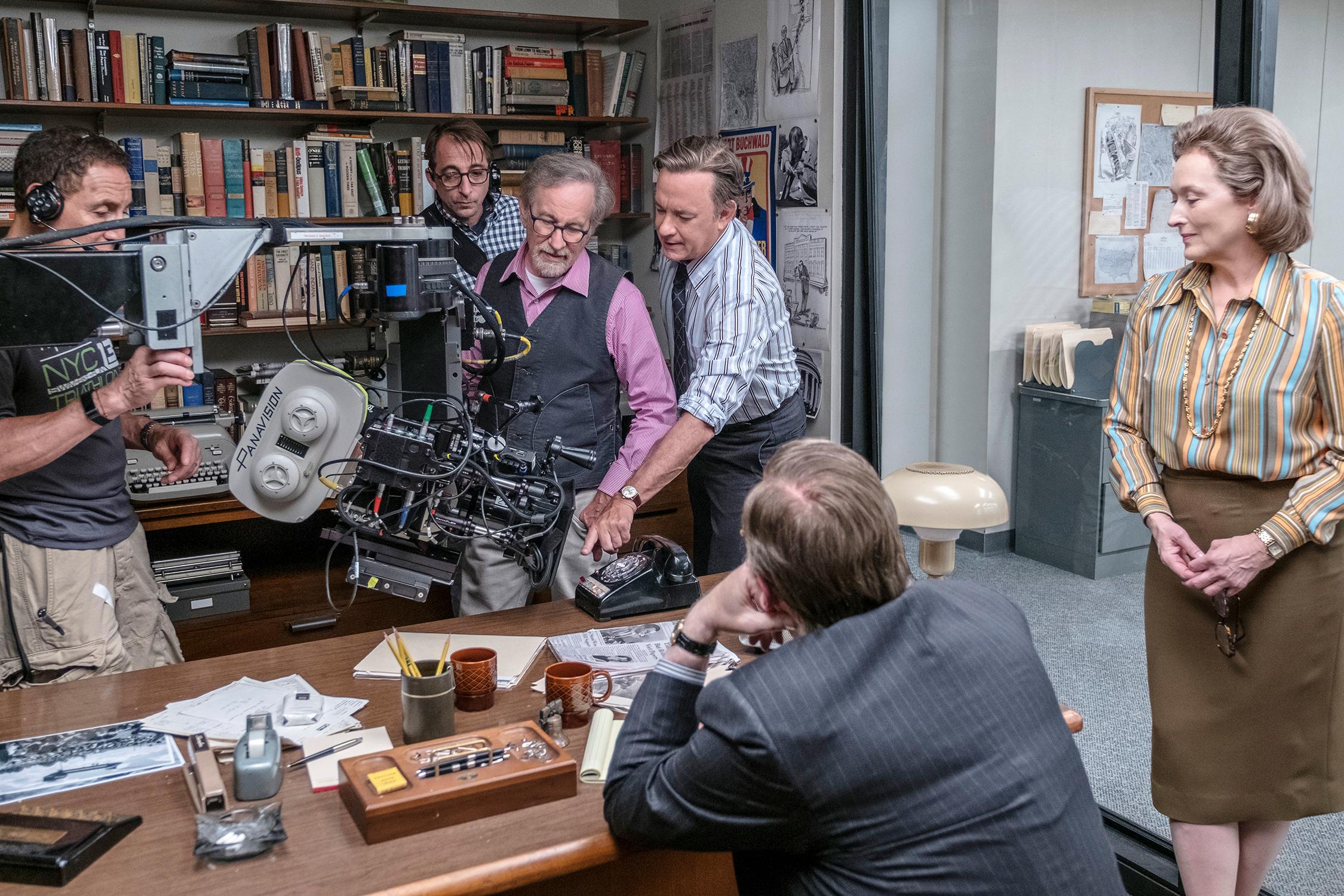 Whenever Spielberg attaches his name to a project, there’s going to be a significant amount of buzz behind it and usually a pretty high standard of quality to go along with it. He certainly has a keen knack for storytelling which lends itself nicely to period pieces and that holds true here. The script by Liz Hannah and Josh Singer put much of the emphasis not just on the relative importance of the classified documents in question, but on the individuals burdened by the weight of making the crucial decision to publish them. Specifically, publisher (Katharine) Kay Graham and Executive Editor of the paper Ben Bradlee. While Graham was struggling to keep the paper in business and take the company public, Bradlee was working to unravel the mystery behind the leaked documents and bring that information to the public. It’s no secret that the strength of this film rests in the capable hands of Tom Hanks (Bradlee) and Meryl Streep (Graham), but the heavy lifting is made easier thanks to a strong screenplay that has enough humor to be entertaining and allows the cast to play to their own strengths, despite the subject matter.

Somehow, this is one of only two occasions where the powerful Hollywood veterans have shared the screen. The other, coincidentally, was the 2015 documentary film Everything is Copy about the life of Nora Ephron in which Hanks, Streep and Spielberg are all interview subjects. In the case of The Post, their consummate professionalism and undeniable skill created a very natural chemistry as if they’d been working together for years. They don’t have a tendency to make bad films or, at the very least, they typically don’t take bad roles. Both Streep and Hanks were strong performers (big surprise) and on a different year these roles could have put them at the head of the pack during awards season, but that won’t be the case this time around.

For a Spielberg film, I found there to be some moments of surprisingly low production value. It was nothing that ruins the film, but there was some cheap looking green screens and exterior sets that plainly looked phony. Poorly executed hair pieces and several shots with terribly overblown lighting. Again, these aren’t things that make the film unwatchable, but when it’s being pushed into contention for Best Picture, I think close examination of the filmmaking quality is fair game. If we’re going to give out awards for achievements in the craft, then it’s important to note that this movie isn’t at the top of the heap in those production categories. The costume design by Ann Roth, on the other hand, was very well done and went a long way in establishing period authenticity more than many other stylistic choices for this movie. The most earnest and rewarding moment of veracity comes towards the end of the film when the final newspaper product is being typeset before the final print run can begin. It’s a moment that may not stir up emotion in most, but it’s certainly something that harkens back to a time where news was a much more serious business and there was a sacredness in bringing it all together.

There was a huge cast responsible for bringing this story to life and Ellen Lewis did a good job casting a nice mix of talent to complement one another. Fans of Mr. Show will be glad to see Bob Odenkirk and David Cross reunited in supporting roles as Post employees helping to investigate and report the pentagon papers. While the two help to add levity, these were legitimate roles and not merely there comic relief. Odenkirk was very good in his role as Ben Bagdikian, pulling from his dramatic experience on both Breaking Bad and its prequel series Better Call Saul. Not that he plays a slimy lawyer constantly battling moral ambiguity here, but his ability to temper the balance between dramatic and comedic effect was a much need touch of authenticity as a journalist. Matthew Rhys is actually very good as Daniel Ellsburg, the whistleblower who leaked the information, but he doesn’t really have enough screen time to do his performance justice.

There’s a secondary theme, aside from allusions to the current administration, regarding the perception and misconception of women at the time. A strong feminist narrative (which you can see on the cover of the Hollywood Reporter: below). While Kay Graham is mostly busy doing her due diligence as a socialite for the majority of the story arc, there’s a late turn that paints her in a much more heroic light. After all, it’s her company, her life and livelihood on the line… much more so than anyone else. It’s an important distinction to make and that point hits home at a crucial juncture in the film. Bringing her character arc full circle was one of the most important elements of this story as her role in journalism and in business was unheard of at the time. She would go on to become the first female on the Fortune 500 list as CEO of the Washington Post and also became a champion of gender equality during the Civil Rights era. A rare example of a woman with any significant power at the time. I’m actually a bit surprised that the film wasn’t focused more through that prism, instead choosing to focus on one specific event in her life. Nonetheless, Graham is a very interesting person who very well may have movies made with her as the focal point down the road and any broad recognition for her efforts was long overdue.

Considering all the Hollywood A-listers involved in the film, it ended up being a bit underwhelming. Don’t get me wrong, it’s a perfectly fine movie but didn’t stand out from the rest of the field. With everything on the table in the current political environment, this film had the potential to be great, or at least have a significant social impact, and wound up settling for being good enough instead. In hindsight, Spielberg’s hastened production schedule was evident in his efforts to strike while the iron is hot.

Recommendation: If you are a fan of history or journalism, then there’s enough of those elements to make it worthwhile. And there are some strong acting performance that carry the film despite a very slow start. Coming in with a PG-13 rating, this is a family friendly offering but the rating seemingly undercuts what’s really at stake in the plot.