With the ongoing war between DC and Marvel Studios, each subsequent film comes with greater inherent risk, especially for DC. After a much needed win with Wonder Woman, any step backwards would be viewed as a massive failure and rightfully so in many ways. Thor: Ragnarok added to the long string of successes for Marvel in early November, so there is a ton of added pressure on the shoulders of Justice League two weeks later. From reshoots to rumors, sometimes, certain projects are just cursed.

So, let’s just go ahead and get this out of the way…there is no Justice League without Superman. This should have been, and maybe even was, obvious to everyone but after rumors of reshoots and Henry Cavill’s contract/mustache fiasco began to surface on the internet, the cat was out of the bag. Despite the studio’s best efforts to keep Supes off the promotional material, the levy had already broken before the official release date and, wisely, the most recent trailer kicks off with a shot of Clark Kent standing in a corn field. Fortunately for me, and hopefully for all of you, this whole mess resulted in some seriously golden unintentional laughter. Even with top of the line CGI, the shadow of Cavill’s digitally removed mustache lingers over this film in certain scenes, making its presence felt awkwardly with what I’m affectionately coining “Stroke-face Superman”. Once you see it, you’ll know what I’m talking about. All kidding aside, I actually like him as Kal-El. Even though Man of Steel and Batman v. Superman were mostly disappointing, he was easily one of the strongest aspects of those movies. Plus, since he’s one of only two characters in this film who’s had their own stand alone story within the new cinematic universe, he’s much easier to digest in this role again. Guess that eliminates the Death of Superman story arc that worked well in the comics. That being said, he suffers (like all the characters do) from Chris Terrio’s screenplay that sacrifices heart and depth for a convoluted plot. 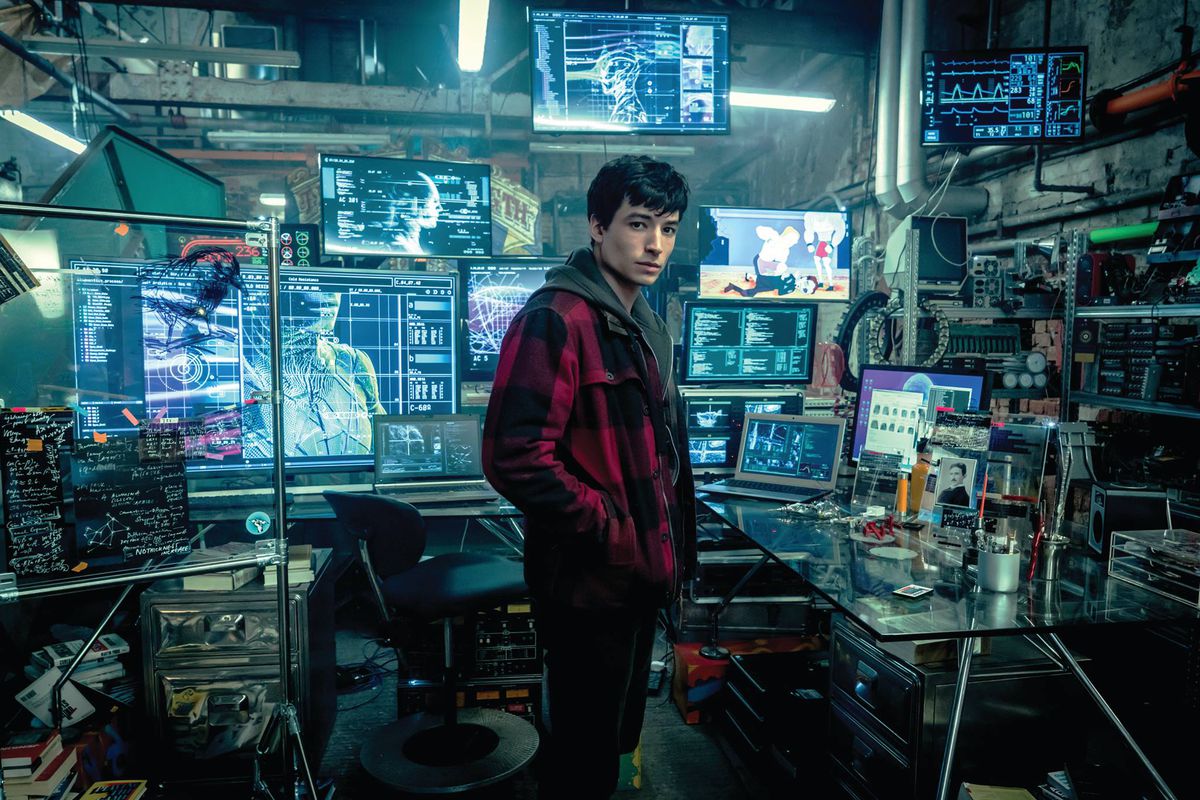 I will concede that Ezra Miller’s Flash was a pleasant surprise though. Based on the trailers, I wasn’t thrilled about the angle they were taking with the character. His sense of humor just seemed desperate and off putting, but it plays out over the course of the film and injects some much needed levity to a script that doesn’t allow for much fun otherwise. With some cameos in Dawn of Justice and Suicide Squad, Miller didn’t have a ton of screen time in costume under his belt to hone the character but he fits the “annoying yet lovable” younger brother type pretty well and watching him basically become the Flash is one of the more enjoyable aspects of the movie.

Gal Gadot was good once again playing Wonder Woman for the third time now, but she just didn’t have the same impact this time around. Sure, she is still kicking ass but there was just something missing as she took a backseat. There were questions about her leadership written into the script but it was already pretty obvious where the film was heading and who was running the show. Speaking of Batman, Ben Affleck also donned the cowl for the third time and was mostly out in front as the leader of the team. While he plays the caped crusader well, I could do without his Bruce Wayne. Thankfully he spends the majority of this film with his secret identity being a non factor, so he can just do his Batman thing. I wasn’t sure what to expect from Jason Momoa’s Aquaman but I think he came in just balanced enough. Famous for his Kahl Drogo on HBO’s Game of Thrones, distancing himself from that iconic character by stepping into another, much different one is no easy task. Even without much backstory, he takes to the role pretty well and feels at home much quicker than other members of the party. The solo Aquaman film in the works has potential with Momoa in the lead, but the success of that project remains to be seen.

From the hero side of things, the biggest miss was clearly Cyborg. He is very unique and interesting character, who should be the heart of this movie, but he never gets his due and is relegated to a tertiary hero role. Ray Fisher has basically been introduced to the world as this character and has showed a great deal of potential. As such, he has a tremendous opportunity to own the role even if he wasn’t quite ready to take the lead in this film. However, he definitely should have been the center of this story if for no other reason than the technology which made him is directly connected the the plot fulcrum. Aside from that, it would have helped to established the JLA as a team rather than giving off of A and B team vibes. Instead, the film prefers to stick to its comfort zone and highlight the already established trio of Wonder Woman, Batman and Superman, which begs the question: why even add all these other characters if only to shy away from giving them well thought out definitive roles with real depth? Oh yeah, The Avengers. If it wasn’t already painfully obvious how desperately DC wants to be Marvel, it sure is now. If they even got halfway there it would be an improvement over some of the shit they throw against the wall and hope it sticks.

Speaking of which, if you thought (like I did) that Ares was a lame, milk-toast villain in Wonder Woman…well, DC somehow lowered the bar for just how asinine villains can be in their universe by introducing Steppenwolf. He isn’t worth loving or hating and, as a result, just kind of exists to annoy the audience into submission. Fine. We get it. You’re evil. But what’s the point here? He’s just another unfortunate example of an ill conceived and even more poorly executed character, from the ground up. It’s not Ciarán Hinds’s fault and the character isn’t inherently this bad, but his motivations here aren’t well established and neither is his backstory. For those of us who are familiar with him from other media, it makes the lack of tangible connection to the source material even more frustrating. It’s fairly obvious they are hinting at a Thanos-like role for Darkseid at some point but the average movie going audience wouldn’t, and shouldn’t be expected to, pick up on that.

There are some things this film did well, like bringing in Danny Elfman to compose the original music and the inclusion of his own theme from the 1989 Batman along with John Williams’s Superman (1978) theme. Both scores (but especially Williams’s) played large parts in the iconography of those characters on film and had been sorely missed. Unfortunately for DC and for all of us, there’s a lot more that didn’t quite hit the mark. It’s clear that Zack Snyder has a cinematographer’s eye, but his style of direction has led the DC cinematic universe astray. Smartly, the studio brought on Avengers director Joss Whedon (who’s got a Batgirl project in the works) to help finish the film when Snyder had to step away from the project for family reasons. Unfortunately, that doesn’t really help the cohesiveness of an already messy and hurried plot. It felt a bit like 80s Batman, Watchmen and Dawn of Justice crammed into one another…each battling for the light. Even the production design by Patrick Tatopoulos is a mess. Similar to his work on Batman v. Superman, the world design has a very muddled perpetual orange hue like it’s stuck in a constant sunset. There was a bizarre organic element to the villain’s world-changing that didn’t fit the film and certainly didn’t line up with the source material. At least the parademons were well done but they couldn’t quite make up for the completely uninspired, colorless Steppenwolf who looks like a moving granite statue.

Although I’m a big fan of the Justice League and have thoroughly enjoyed the animated iterations, throwing all these unique heroes together so quickly was a huge mistake in this instance. The haste is evident and it takes forever for the “team” to actually develop any chemistry, thankfully sparking just enough before the film is over. And while we’re at it, as long as DC was just throwing undeveloped heroes in the mix, where the hell is the Martian Manhunter? If they could take the time and effort to recast, rebrand and separate the Flash from his television counterpart, they could have done the same for J’onn J’onzz. He’s easily one of the coolest and most interesting members of the JLA and just happens to be a super powerful badass in his own right. But in hindsight, it’s probably a good thing he wasn’t involved in this movie since they didn’t exactly do a great job with the characters that they did include.

Despite all the things I didn’t like about Justice League, I still mostly enjoyed watching it. When it has its legs under it, it can be very good, but those moments are very short lived. This film has so much potential to be better, more than it is. There is a depth to the characters that was washed over and a significantly better story to be told with them at the center. The straight-to-video DC animated films have managed to crank out good, successful stories repeatedly (for quite a while now) and Producer Geoff Johns, who has worked on many of those titles, needs to seize control and move the universe together in one direction.

Recommendation: If you’re anything like me, regardless of how low your expectations for this film may be, you’re going to go see it anyway. There are things to enjoy in this film, but you’re still left knowing that things could have been so much better. Despite the tonally and visually darker approach that DC has tried to cultivate, this film still comes across very childish at times. If you’re a fan of the comics go check it out, but if superheroes aren’t your thing then there’s no need to waste time or money on it.