In a year where the DC Extended Universe finally got a much needed win at the box office with Wonder Woman over the summer and Marvel Studios looking to swing the pendulum back in their direction after an underwhelming (albeit successful) Spider-man: Homecoming earlier in the year, the MCU kicked off the holiday season with the its latest offering…Thor: Ragnarok. The third installment in the Norse god series stormed into theaters to the tune of $122-million on its opening weekend while raking in an impressive $300-million plus from foreign markets. In the war for superhero cinema supremacy, Marvel is staking its claim to 2017 two weeks before DC’s Justice League hit theaters. While there is plenty of spectacle to be had throughout, the movie wallows in its mismatched sense of humor and fails to deliver when anything of substance is actually on the table.

Although this movie found success at the box office and positive response from critics, this could have (and should have) been so much more. As I speculated in my review for Guardians of the Galaxy Vol 2., Marvel Studios’ decision to wander headlong into the world of comedy has come at a cost to storytelling. Due to the nature of the Guardians themselves, the first film’s sense of humor felt authentic and organic but the sequel saw severely depreciated returns the second time around. Don’t get me wrong, Guardians 2 had its moments but the whole thing felt like they were trying way too hard to force it in the follow up. How does this relate to the new Thor movie? Well, the decision to bring on Taika Waititi to direct meant that this new movie was going to take the franchise in a completely different direction. He did exactly that and (by most accounts) did a fantastic job rebranding Thor as a more relatable, down-to-earth character. Stripping him of his hammer and forcing him to be more “normal” allowed Waititi and the writers to develop a more nuanced character with much more of a personality.

Christopher Yost (writer) and Craig Kyle (producer) both worked on Thor: The Dark World while Eric Pearson cut his teeth writing for the Marvel television series Agent Carter before coming together to hash out the screenplay for Ragnarok. All of them had written for Marvel in some capacity or another so the characters were all familiar. Taking a character like Thor and tampering with his iconography and general character makeup is a risky gambit, but it paid off. The film’s early success is no doubt due, in large part, to the script that these guys put together and the vision Waititi brought to the table. The New Zealand born director also voices the Kronan rock creature Korg who serves as a comedic ambassador of sorts thanks to his timid humor and accent. While much of the screenplay’s focus was on generating laughs, there was a family drama bubbling beneath the surface between the primary players.

Thor, Loki and Odin (Anthony Hopkins) have all been part of the greater MCU for some time now and their quarrels have going on for even longer. Given the considerable power of the three, their disputes tend to resonate throughout the rest of the universe. So, when I saw the trio together, I figured something big had to be going down but it was mostly localized to the Asgardian royal family. While the plot focuses on their family’s hidden past, there is little emotional consideration or attention given to these characters. Without giving everything away, let’s just say there are some pivotal moments that change the world of Thor going forward and these events should have significant emotional and personal impact on the characters involved, even if they are gods. Instead, there is a strange sterility written in and the characters carry on jokingly with little-to-no pause for reflection. That choice stripped them of a pivotal element of humanity which the film was trying to cultivate by rebranding the franchise in the first place. Moments like that come a cost. In the haste to make Thor a more relatable and down-to-Earth character, it’s almost an oversight to acknowledge that he is a literal god in this universe. That mentality infected the rest of the script and effectively drained the film of any seriousness whatsoever. When the Goddess of Death is cracking wise repeatedly while in mid-conquest, it’s rather difficult to take her seriously.

Speaking of which, as much as I like Cate Blanchett, she was basically a waste in this role. Marvel has always done a good job acquiring A-list talent to take on the villain roles and this was no exception, but the character wasn’t written to take advantage of her skill set. Instead, Hela is an entity of pure power. There is nothing cerebral about the character and Blanchett’s considerable talent doesn’t get to shine through. With a fresh new haircut, Chris Hemsworth got to have a lot more fun this time around playing the titular character. After his performance in the Ghostbusters reboot, he got a chance to showcase his comedic chops once again which should bolster his position as a popular commodity within the MCU and help to diversify his roles abroad. There hasn’t been a Hulk solo film in nearly 10-years so it was nice to see the big green guy so prominently featured in this film. Mark Ruffalo got to let loose a lot more as well, playing a much more vocal and communicative version of the Hulk. His turn as Bruce Banner was less rigid as well, playing well off Hemsworth without the other Avengers in the picture. Tom Hiddleston didn’t change his Loki much, if at all. All of the character traits that played so well in previous films fit in even better this time around. Despite his continual role as a villain, or occasional anti-hero, Hiddleston’s tone and timing have continued to make him one of the most well liked characters in the MCU. 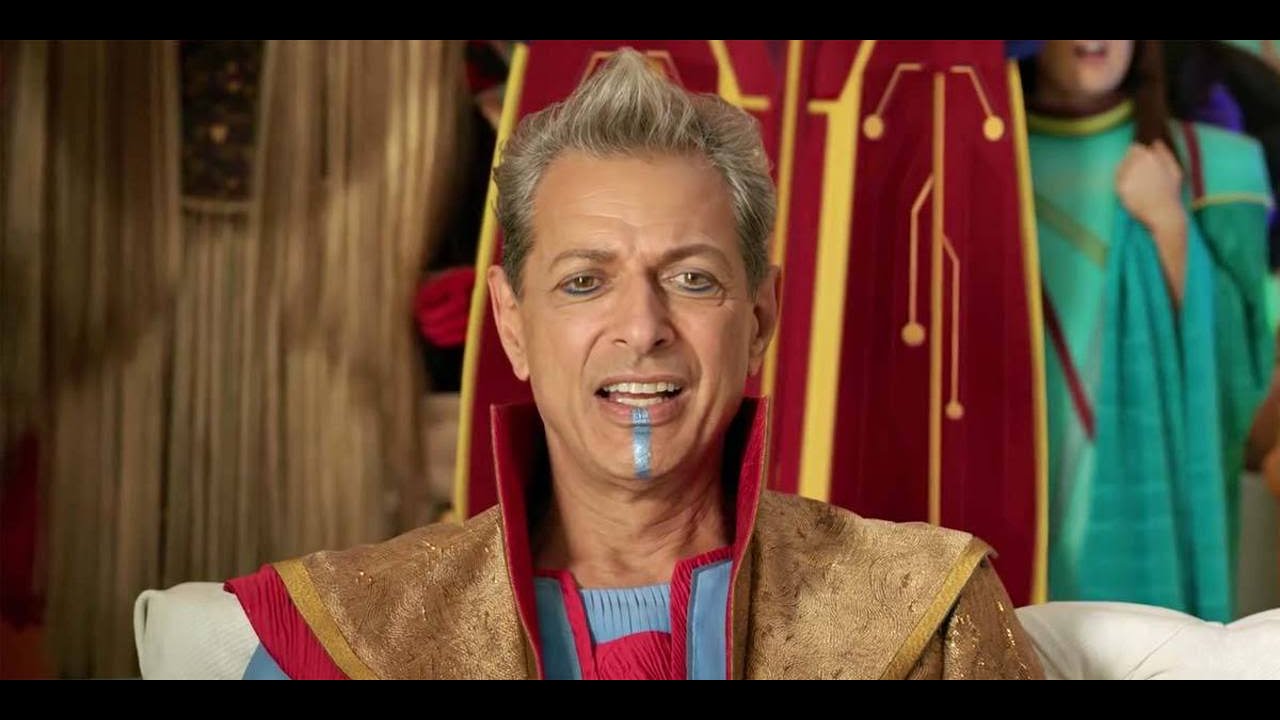 With all the familiar faces and talent attached to this project, it was Jeff Goldblum as the Grandmaster who was the best character in the film. His comic delivery and cadence fit perfectly with the tone of the film and his bizarre leadership style felt very much at home within the larger context of lawlessness on the planet Sakaar. Given some of the stranger beings the audience is beginning to witness in the MCU, Grandmaster was certainly one of the most enjoyable. Tessa Thompson rounded out the main cast playing Valkyrie, or more accurately an Asgardian who was a member of the military force known as valkyries. She was very strong in this film as well and had a much more interesting character than the main players. Troubled by a past she abandoned and wasting away on Sakaar in a life of alcoholism and bounty hunting, Thor’s arrival brings everything she’s hiding from back to the surface. Benedict Cumberbatch briefly reprised his role as Dr. Strange in a lengthy comic sequence that played well but still went on for far too long. There are some other surprising cameos to keep an eye out for as well.

There is certainly no lack of effort or imagination that went into creating the visual aesthetic of this movie. The production design by Dan Hennah and Ra Vincent was exceptional, particularly when it came to creating the planet of Sakaar. There were clearly creative influences from all over the globe which makes sense considering the planet was something of a dumping ground for the entire universe. If you stay to watch the mid and end credits scenes, which have now become synonymous with marvel films, you’ll see just how many people are employed to bring the vision of these films to fruition. This film’s success is as much theirs as anyone else’s. Even with some considerable oversights, the entirety of the project came together nicely and delivered one of the most fun films of the year.

Recommendation: I wouldn’t go as far as to call this a “must see” film, but you could certainly do a lot worse if you’re looking to spend money at the theaters this weekend. It’s family friendly, action packed and has plenty of fireworks.