For months, I was inundated with the trailer for this film during theater previews and on TV at home. There was no escape. Despite the seemingly incessant advertising, I wasn’t buying it. Sure the cast is strong and Edgar Wright directing carried promise but the idea of another heist movie, especially one based around the driver, seemed completely derivative. With a basic premise that’s been done before and a title that sounded like the sequel to Dreamworks’s latest animated flick, this movie had impending disaster written all over it. I was very wrong. Not only is Baby Driver a pleasant surprise, it’s the best film of the year so far and the most fun I’ve had at the movies in 2017.

At the forefront of things contributing to my apprehension, I wasn’t sold on Ansel Engort as a leading man and trailers for this film weren’t helping with that. His role as the love interest in The Fault in Our Stars put him on the map, but subsequent tertiary roles in the Divergent trilogy didn’t exactly boost his stock. But as it turns out, the kid can play. He has a strong, almost expressionless, stoicism which works out great with the character. Baby is definitely a throwback character, everything from how he spoke to the way he dressed. I couldn’t help but feel a kind of Elvis vibe coming off him. This will definitely catapult Engort to the upper echelons of selective casting in a hurry and there is always the possibility for a sequel down the road as well.

As usual, Francine Maisler did an excellent job casting. Stacking the rest of the cast with top tier, A-list talent alleviated the burden of success from the kid’s shoulders… a rising tide lifts all ships kinda of a thing. Kevin Spacey got to have some fun unleashing his inner Lex Luthor again playing the role of Doc, a high level criminal mastermind and a surrogate father figure/mentor for Baby. Spacey’s keen knack for comedic timing along with his brooding intensity and expressive face helped set the tone for the rest of the cast. John Hamm is very strong as well playing Buddy, basically the exact opposite of the FBI agent he played in The Town. There is a wildness in his eyes giving way to the fact he’s a bit unhinged behind his calm and charming demeanor. Eiza Gonzalez was good, but not great, as his wife and partner in crime Darling. She reminded me of a Michelle Rodriguez both in appearance and demeanor. Gonzalez was very bit the fiery Latina but something of a cliche as well…sexy, manipulative and outright crazy. This was probably her biggest role so far and she’ll have plenty of opportunities going forward. Jamie Foxx turned in another stellar performance as Bats, a character seemingly born from the Motherfucker Jones character he played in Horrible Bosses. Bats is volatile, funny and genuinely crazy, but he’s all business and not to be played with. He is very much to-the-point and acutely aware of the inherent consequences, strangely enough he is really the one who forced Baby to become a man. I almost forgot to mention Lily James. While she isn’t particularly special in her role as Baby’s love interest Debora, they do have good chemistry and she fit the bill nicely. Even John Bernthal is good despite his limited role.

With this film, it seems like Wright made a movie that will cross him over to mainstream audiences. His work with Simon Pegg which made him famous (Shaun of the Dead and Hot Fuzz) stayed within its box, namely, the ‘Simon Pegg as the lead’ box. While I enjoyed those movies, I wasn’t part of the hardcore cult following that loved them. Scott Pilgrim vs the World marked a significant change in visual style and creative freedom for Wright and he continued in those footsteps with this new film. Personally, I’d like to see him continue down this path which seems to be a much more unique and personal style of storytelling. His sense of humor has remained a signature, and it’s present here if not overtly dominant in the script. Unfortunately, after running the trailer ad nauseum, the same Mike Myers Halloween mask joke for the umpteenth time sure didn’t make it any funnier. That was one of very few misses throughout the film. Otherwise, the script was very strong with some fast paced hard hitting dialogue. The characters are all written very well and each of them has a unique arc, while remaining interconnected, that unfolds through the course of the film.

As I heard someone else put it, this soundtrack is a music nerd’s dream…and it’s awesome (on Spotify here). If the trailers for this film didn’t make it abundantly clear, music plays a hugely important role. Not just for Baby who is constantly listening to something in his headphones, but to the context and execution of the entire film as a whole. The action sequences are set to songs from the soundtrack with the sound effects synchronized and overlaid on top, feeding off each other for a much more cohesive and intimately connected experience.

Speaking of action sequences, the stunt drivers were amazing. The choreography was top notch and without both this movie wouldn’t have made it past the first scene. The hundred or so stunt drivers really deserve heaps of credit for bringing credibility to the driving scenes and pumping blood into the heart of the title. In a radio interview on Jonesy’s Jukebox, Wright said he decided to keep the actors in the stunt cars while shooting as well. This immediately added time to the production schedule but ultimately resulted in authentic reactions from the cast which couldn’t be attained shooting against a green screen. Bill Pope had a tough task capturing some of these shots, but clever sidecar design allowed some cool shots to be captured. His cinematography is exceptional throughout the film, not just with the car sequences, utilizing an abundance of closeups and tight framing. Jonathan Amos and Paul Machliss had their work cut out for them in the editing room but truly strung things together splendidly. During the most furious moments of action, the audience feels like they are right there with the cast. 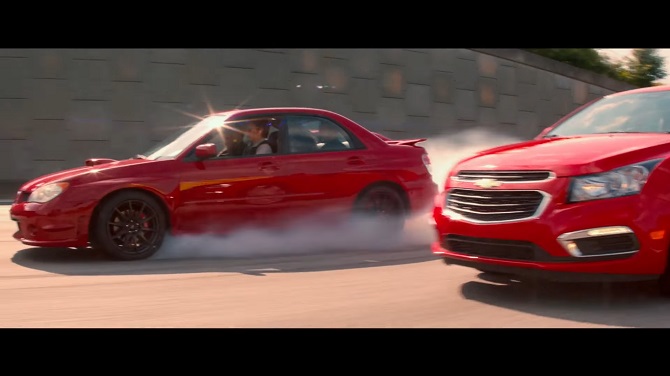 From a technical standpoint there was really no stone left unturned. Marcus Rowland has been Wright’s production designer for all his films and having a friend in that position helps keep a congruent vision on track. Nigel Churcher and Justin O’Neal Miller did a really nice job with the art direction and painted a very colorful world for this story to take place in. Lance Totten’s set decoration wasn’t always the key to a particular scene or shot, but was crucial in displaying subtle details in the differences between Baby’s home and professional life. Similarly, Courtney Hoffman’s costume design was exceptional when it counted, each player had a uniform that was a reflection of their personality.

This is a movie that grabs you from the very first scene and doesn’t let go. The soundtrack has you groovin’ the whole time and it’s paced really well so even though it feels like the two hour film it is, you never really have time to get bored. The strength of the script and emphasis on soundtrack struck chords or Tarantino and Guy Ritchie, which is some pretty good company to be in. There were a couple of stunts that were just plainly not believable, but that’s it. Just two and it wasn’t enough to even stall the momentum. There honestly isn’t much bad to say about this movie at all. It’s a lot of fun from start to finish and enjoyable in a lot of unsuspected ways.

Recommendation: Go see this movie. It completely blew my expectations away and it’s worthy of the praise it’s gotten so far. There are some moments that warrant the R rating, but overall it isn’t something you have to be afraid to let your children see. Considering what’s on the market these days, this film is well worth your dollar.

Grade: B+ (edit: upon further review)