Since I started writing movie reviews, I can honestly say that I hadn’t come across something I felt was outright terrible. Partially due to selectivity and partly luck. That streak came to a definitive halt with 47 Meters Down. It wasn’t naive about what I was getting into, but the movie exceeded even my lowest expectations. Despite fairly favorable reviews, it was easily the worst movie I’ve seen this year and probably the worst I can pull from recent memory.

Let’s start with writer/director Johannes Roberts who was ballsy enough to advertise his name on this thing during the opening title. He doesn’t have a highly regarded name and has made almost nothing but B-level horror movies throughout his career and that’s exactly what this one felt like. It turns out the film was originally slated for DVD and video on demand release (big surprise) but a last minute deal by distributor Dimension Films sold the rights to Entertainment Studios who cancelled that plan and opted for theatrical release. The advertising was really effective which helped recoup the $5-million budget on opening night alone and it earned back triple its production cost within a week, so the gamble was worth it. All that being said, the movie still sucks. At the end of the day, Roberts has to take responsibility for this mess and learn from it going forward.

For starters, the screenplay wasn’t any good. The characters are shallow, poorly developed and ultimately unsympathetic once shit finally hits the fan. Having characters to root for is a big part of good horror films, Roberts and writing partner Ernest Riera certainly missed the boat on that. The entire premise is flimsy as well, but I’ll let that slide because these girls had to wind up in a cage at the bottom of the ocean somehow. Once they get there, things don’t get much better. Wearing full scuba gear for the majority of the movie doesn’t exactly lend itself to emotional close ups and buries the costars behind rubber and plastic. That’s a problem made worse when the two sisters are trying to have a heart to heart talk on the ocean floor. Roberts would have been better off using some of the budget to rig cameras on the inside of the face-mask or find a different design that worked better on camera.

Aside from the technical shortcomings, using the sharks to push the plot narrative was a huge mistake because it led to inconsistency. While the random shark-in-the-dark problem did provide some jumpy moments, it never really seemed like the biggest threat for the characters who were rapidly running out of air. The failure to nail down a primary threat created a redundant back-and-forth which ultimately detracted from both. Even the ending was a blatant, poorly executed and uninspired bait and switch. I shouldn’t be too hard on Roberts, he probably thought he was making a straight to video release and ultimately, this film was surprisingly successful. His visual storytelling isn’t bad, but he still has a long way to in other aspects of filmmaking. 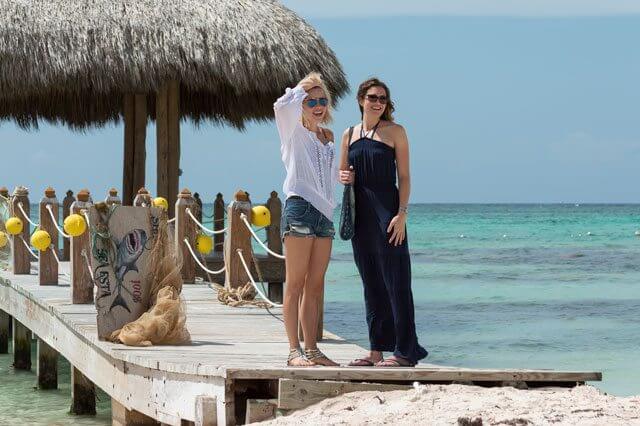 What (I should say who) really sunk this movie more than anything was Mandy Moore. She couldn’t act her way out of a paper bag, much less a cage at the bottom of the ocean. I haven’t followed her, so maybe the performance isn’t indicative of her career, but it seems she got the role based solely on her name. I have no idea what Colin Jones was thinking when he cast her (well I have some idea) but Claire Holt was much better on screen and would have ultimately made a better lead. Further detracting from the limited believability of this film was the complete lack of any genuine chemistry between the two actresses. They were barely convincing as best friends, let alone sisters (which, if I remember correctly, isn’t clarified until one calls the other “sis” almost halfway through). There was hardly even a chance for good acting performances in the one. Matthew Modine brought some credibility to the table, but his caricature of Captain Taylor doesn’t suit him. The majority of his dialogue is done via radio with the divers, so he isn’t even on screen all that much anyway, which wastes his familiarity.

I imagine shooting the majority of this movie underwater presented it’s own set of unique challenges, and Mark Silk managed to do a pretty good job with the cinematography despite the aforementioned. He was very creative in his angles and used seemingly every inch of that cage to avoid the same shots over and over again. The score by tomandandy (Tom Hajdu and Andy Milburn) was actually pretty good as well. They have plenty of experience scoring thrillers and horror flicks, which brought some much needed feeling to an otherwise very banal experience. The visual effects team and the animation department put together some incredible looking sharks for this movie, it’s just sad they weren’t in it more often.

In the wake of Jaws (1975), there has been a litany of films attempting to gobble up some of that fan base through imitation rather than innovation. Stylistically, this movie lands somewhere between Open Water (2003) and Piranha 3D (2010). Made with a noticeably larger budget than the former, that money wasn’t put to great use and lacks the effective filmmaking and storytelling to suspend disbelief. The latter understood the campy nature of what it was selling and gave the audience exactly what it was there to see…plus the cast for Piranha 3D was stellar. In a marketplace filled with similar movies, 47 Meters Down brings very little to the table in comparison.

Recommendation: Don’t waste your time or money on this movie in theaters, unless you’ve really exhausted all your other options at the box office. Wait until it’s on DVD or VOD where it belongs and then check it out guilt free.