The latest entry in the Marvel Cinematic Universe hit theaters with an abundance of fanfare as the most anticipated movie of the year so far, earning nearly $150-millon domestically and close to $500-million worldwide on its opening weekend. Playing heavily on themes of family, responsibility, longing and redemption, Guardians of the Galaxy Vol. 2 played it safe didn’t stray far from its predecessor. Although it’s very similar to the first film in nearly every way, I’ll do my best to address the strengths and weaknesses without giving everything away.

Volume 2 finds our heroes mid-adventure as hired guns of sorts, for a race of golden interstellar beings called the Sovereign. After shit hits the fan, friction within the group boils over and they inevitably find themselves on the run. When a new stranger introduces himself and Peter Quill’s father, the group is split while the new mystery is investigated. While Quill, Drax and Gamora explore an amazing new world with seemingly endless possibilities, Rocket and Baby Groot are left to fend off the Ravengers on their trail. Coming as no surprise, things aren’t as they seem and members on both halves of the team must each face personal hurdles and reconcile their differences in order to work together again and (duh…you guessed it) save the galaxy.

Writer/Director James Gunn has a strong grasp at the helm of his latest film and his place in the larger Marvel Cinematic Universe as a whole. His unique blend of humor and action set to vintage musical hits resonated with audiences in way that other comic book stories in the cosmic realm have failed to. Films like Green Lantern (2011) and Thor: The Dark World (2013) reached for the stars, spending much of their respective runtimes away from Earth but just didn’t connect with audiences. Where those films failed (and Guardians succeeds) is the lack of humanity in the story itself. Gunn had the chance to learn from those failures and craft a cosmos is his own image, rooted in tangible human experience. At the forefront of that is his sense of humor which is unabashedly weaved into the vast majority of the dialogue. It plays well because, despite the odd cast of characters, it’s based heavily on family dynamic. Most people can easily relate to the teasing and bickering that come with the territory and the script directly references “family” on more than one occasion, just to drive the point home for the more obtuse audience members.

Part two of Gunn’s success is obviously the use of music to aid the storytelling. Much like Quentin Tarantino, he understands and utilizes the power music holds as a vehicle to connect to the audience. Even though many of the “Awesome Mix Vol. 2” soundtrack selections for this sequel may not be familiar to a large percentage of the audience, they are certainly of particular significance to Gunn’s vision of the final product and he uses the music to elicit emotional responses. Furthermore, to the credit of Music Supervisor Dave Jordan, there is a connectivity in the tissue between screenplay and soundtrack. The songs enhance and reflect the thematic messaging throughout the film even when the music is juxtaposed against what is shown on screen, The Chain by Fleetwood Mac being my favorite. With former Avengers director Joss Whedon temporarily out of the MCU picture (at least for now) as he takes on the DC Universe’s Batgirl, Gunn wields significant power in shaping the future of the MCU. 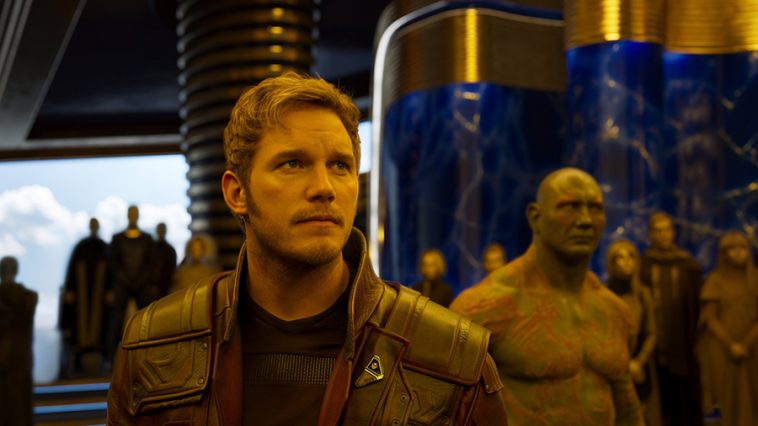 Chris Pratt’s sense of comedic timing and delivery certainly comes in handy when leading this cast and it doesn’t hurt that he’s rapidly become the new standard for the handsome All-American leading man….gratuitous shirtless scene included. His crossover appeal with the female audience is definitely a plus, but he’s got some acting chops to go along with his good looks and it keeps Peter Quill an endearing entity for the whole audience. Despite all that, Dave Bautista undoubtedly steals the show. His character Drax is written with no filter to harness all the punchlines in the dialogue, but Bautista’s delivery is so deadpan it makes his outbursts of guttural laughter incredibly rewarding. He’s come an incredibly long way as an actor who used to basically play muscular thugs with little-to- no dialogue at all.

Kurt Russell was a nice addition to the cast, even with his eerie digitally remastered youthful face. A veteran actor like him is a noticeable shift from Lee Pace’s Ronan in the first installment, not to discredit Pace but Russell brings a gravitas that lends itself wonderfully to playing the celestial Ego. Sylvester Stallone surprised me, showing up as Stakar Ogord. In limited action he did well and may or may not have a larger part in future installments or spin-offs. There are plenty of other significant cameos among the rest of the Ravagers as well.

Regardless of the primary cast, Michael Rooker continues to be my favorite character in the films playing Quill’s whistling, arrow wielding, mohawked mentor Yondu. He does a magnificent job seamlessly navigating emotional subtleties while simultaneously nailing the humor in the script. For everything else that’s going on in the film, his character is an essential piece at the heart of the film. There is a very strong paternal push-pull relationship between Yondu and Peter that’s sharply authentic and it finally reveals itself fully in response to Ego’s appearance. Having lost my own father when I was only 7-years-old, I can attest that there is an inexplicable sense of longing and disconnect that hits very close to home in the film. Karen Gillan was very good in a larger role as Nebula this time around, bringing to light much of her sibling rivalry with Gamora and her ceaseless desire to punish those who have wronged her, including their father Thanos. As the story arc progresses towards the Infinity Gauntlet, we should be seeing more of Nebula as she plays a larger role in that tale.

Pom Klementieff was a pleasant addition as Mantis, but served mostly as a plot mechanism and not a fully fledged character of her own. Now, unfortunately there is no nice way to say this but I’m sick of Bradley Cooper’s Rocket Raccoon. It’s nothing personal, I like plenty of Cooper’s other work but the voice he’s given Rocket is annoyingly inauthentic and the character himself really has no redeeming qualities aside from his Han Solo/Chewbacca-esque relationship with Groot. If any character had to removed from the series in one final act of selflessness, I would have preferred it be him.

In a bit of an odd change, the original film’s director of photography Ben Davis (Avengers: Age of Ultron and Doctor Strange) didn’t return for the sequel. Instead those honors fell to Henry Braham. Although his resume isn’t as stacked as Davis’s, Braham did a very good job considering the scope of this film. Large-scale, organic, planetary artistry opposite cramped and mechanical interiors of spaceships were tough visuals to marry, but it mostly turned out well. The spaceship battles are a redundant blur of lasers, explosions, and cockpit chatter that’s been recycled in numerous films, but thankfully there isn’t too much of it. On strictly visuals alone, I think this is the strongest entry in the MCU so far. Doctor Strange had some incredibly impressive visual effects of its own, but had the benefit of being mostly grounded in a familiar world. Guardians 2 had to design its entirety from scratch, which is a monumental continuity nightmare.

Scott Chambliss had a monumental task as Production Designer, but did a great job overseeing the total vision for the project. Art direction for this project was such an undertaking that it was an eight-person team effort (rightfully so) and headed up by Ramsey Avery. Set decoration from Lauri Gaffin and Jay Hart was no easy job, especially considering the amount of digital additions in post production but the pair did a fantastic job with the aforementioned ship interiors. Between the makeup department, art department, sound department, visual effects and stunt teams it’s safe to say they could easily populate a small town. The sheer volume of human ingenuity used to create and the galaxy in which this film takes place is breathtaking and everyone involved in the project should be proud of the final product.

For all the things it did well, there are two glaring problems with the film. First, it lacks originality and clings to tightly to the original all the way down to the characters interactions and punchlines. Outside of Nebula and Yondu, there was very little in the way of character progression. Instead, the romance between Quill and Gamora barely inched forward. Baby Groot was adorable, but it seemed like those in charge knew it would play well with audiences. The entire opening number was a shameless bit of audience pandering, but it should sell plenty of Baby Groot merchandise. 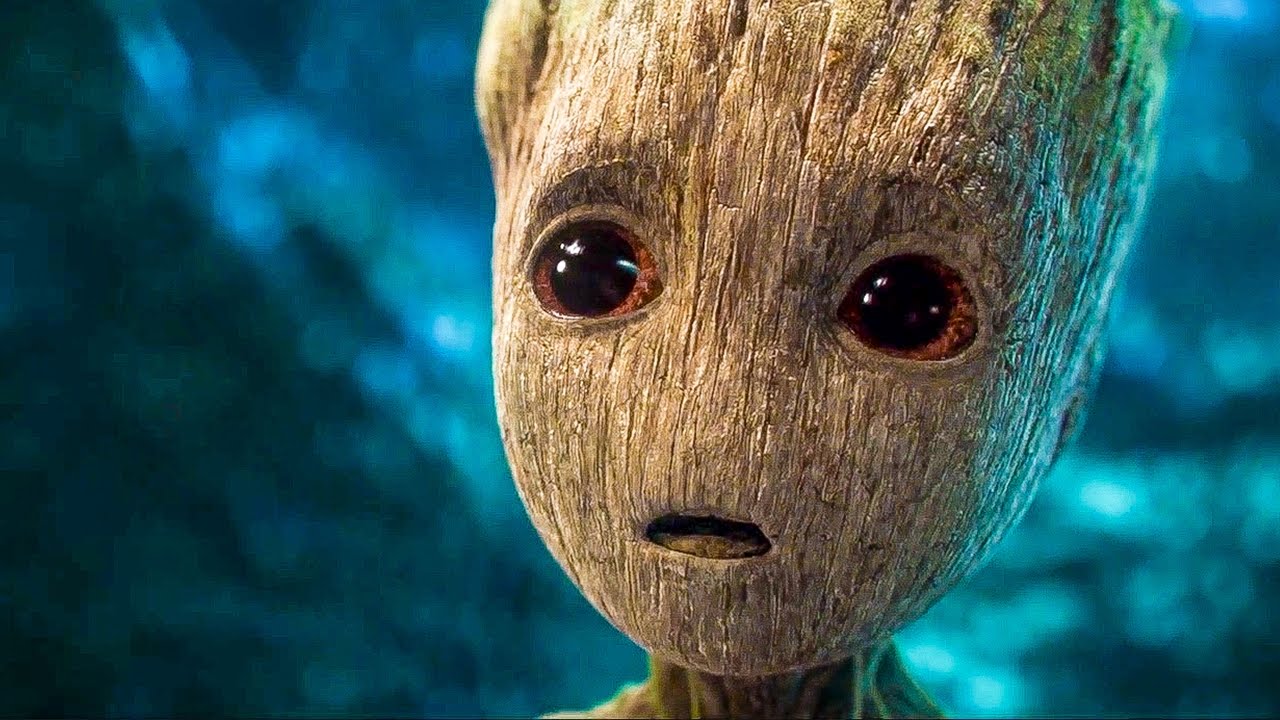 The second major problem was that this film didn’t really feel connected to the rest of the MCU, it’s not until the post credits scene that a connection to the larger story arc is made. As much as Marvel Studios and Disney is banking on the overarching story coming together in the future, this seemed like a swing and a miss in that department. Finally, there is never any real sense of danger. Even as the crew faces the final conflict in the film, you just never get the feeling that things might end badly. Considering the fate of the MCU is supposedly in jeopardy, it doesn’t come across that way.

Reccomendation: If you enjoyed the first film, odds are you’ll enjoy this one as well. It’s a good bit of fun for both young and old and safe for the whole family. Fair warning though, this isn’t a movie for very young children, not because it’s overtly violent or sexual but 5-year-olds don’t know or care what’s going on and aside from Baby Groot, so the thematic intentions of the film go right over their heads.