Although the spirit of the original remains mostly intact, the new take on the Japanese cult classic is short on humanity. Masamune Shirow’s original was always about the fear of technology surpassing mankind’s limitations and what implications that had for individuals, but at least the original Ghost in the Shell had heart. For its $110-million budget and emphasis on visual effects, it left out the qualities which endeared it to fans in the first place.

Visually, this movie didn’t stray too far from its 1995 animated counterpart. In fact many of the scenes, and seemingly all the key action sequences, were taken straight from the anime and essentially ported over into live action, so it’s fair to assume Director Rupert Sanders is a fan of (or at least studied) the original. He doesn’t have much experience directing features and it shows through. On numerous occasions throughout the film, these sweeping exterior shots of the futuristic East Asian cityscape are repeatedly showcased. While it made sense early, the redundant use of those shots serves as a crutch and a waste of screen time. More focus on the characters and their relationships with one another would have gone a long way in creating a more memorable and connective relationship with the audience.

The screenplay by Jamie Moss, William Wheler and Ehren Kruger took some creative liberties with the original story. At the forefront of those was sculpting of the main character. Casting Johansson, or some other actress with mainstream appeal was always going to be the case. The studio was never going to back a project where the lead entity was unknown. However, it’s the shearing of the Japanese lineage from the character that angered so many people. Writing her as Mira Killian (apparently Irish) as a plot mechanism only to reveal her actual Japanese roots as Motoko is more than a bit confusing and ultimately pointless. The original character’s story was functional and didn’t need to be reverse engineered. The dialogue was lacking as well, more focused on communicating plot points than character development. I don’t want to dive into the identity politics, but If you’re interested you can read about that more HERE.

There is no way around this but, quite simply put, Scarlett Johansson was just not good in this film. It’s almost like she wasn’t there. Normally I don’t like to be derogatory, but she warrants no investment in the character…that’s a big problem. It was probably difficult to grasp the character considering the totality of circumstance and the portrayal felt accordingly hollow. There is nothing for the audience to grab hold of…nothing to cheer for. Those who dogpiled on her for the “whitewashing” controversy will have additional ammunition for their assault, but shouldn’t condemn her as an individual. She was offered the role, took it, and collected a nice paycheck along with it…I don’t hold any of that against her. However, I was hoping she would rise to the occasion and prove her doubters wrong. In the past she has shown talent given the right role and the character of Motoko Kusanagi, or in this case Major, was an interesting opportunity for Johansson to spread her wings. Unfortunately that wasn’t the case, largely due to how the character was written and because the majority of the film’s energy was focused elsewhere.

Pilou Asbæk was good as Batou, Major’s right hand and primary support. Oddly enough he had worked with Johansson before, playing Richard in Lucy (2014). He was a good fit for the role, embodying the memorable elements of the compassionate, wise cracking badass. Sadly, he wasn’t really featured as much as he could have been. The same goes for Michael Carmen Pitt who plays Kuze, the primary antagonist for much of the film. Filled with pain and tormented by his past, he is rightfully vengeful towards those who wronged him. A vastly underappreciated talent, Pitt brought a great deal of heart and empathy to this role. In fact, it was him who makes Major worth caring about in the end and I would have much preferred him to be featured out front. Not to be outdone, Juliette Binoche lent her marvellous talent to the film as well. She plays Dr. Ouelet, the primary scientist responsible for Major’s existence and her maternal figure as well. Ouelet is a complicated character torn between her bond with Major and duty to her company. Walking the line between personal and professional responsibility, Binoche delivers a performance worthy of her lofty reputation. Takeshi Kitano of Battle Royale (2000) fame plays Section 9 leader Aramaki and Chin Han plays Han, the only unaltered human on the team. Peter Ferdinando played an excellent villain, Cutter, whose primary objective is to utilize Major as a weapon. A ruthless and heartless business man working for Hanka Robotics, he factors in as the primary antagonist by film’s end.

The visual production elements of the film were very strong, and those who worked on the aesthetics will be very happy with their work being showcased throughout the film. The production design by Jan Roelfs was spectacular and upped the ante on elements of the anime. The set design is great and really presents a congruent vision of the future. Although the costume design fit thematically, the choice to use CGI for Major’s bodysuit was a mistake. It was functional when she transitioned to active camouflage, but detracted from any kind of tactile experience when she wasn’t. 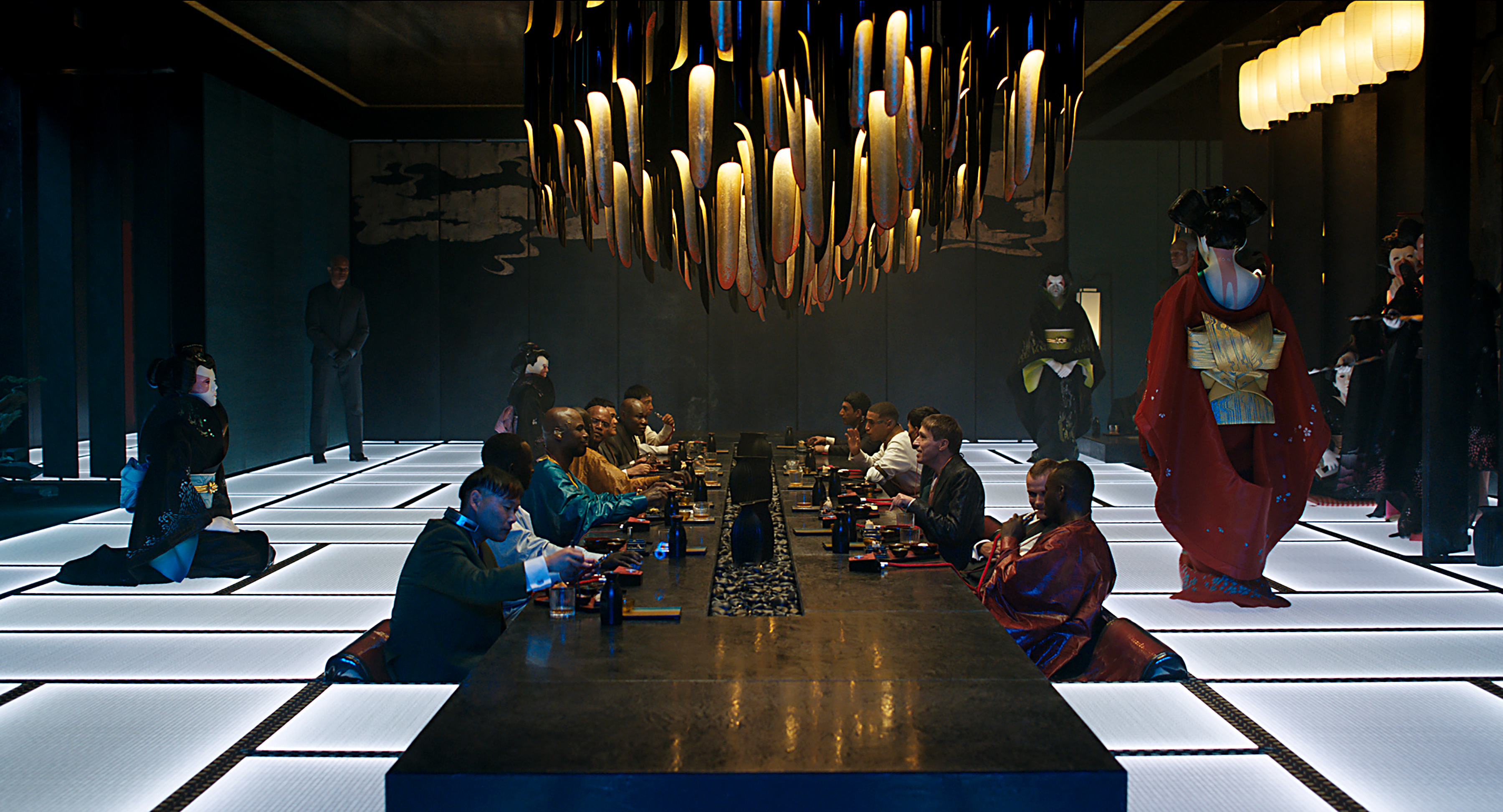 All in all, the film accomplishes what it set out to. It looks good and it’s action packed, but the brooding intellectual science fiction from the original is replaced by a clumsy and misguided plot. Controversy surrounding it should be enough to generate a decent box office return and the franchise is also set up for at least one sequel, but any future installments are just baiting the audience and not earned on merit alone. Ironically enough, by the end of the film, the audience is left with a shell of the original source material.

Recommendation: Fans of the anime should be excited to see the live action adaptation and not feel too guilty spending money on it. Those who trashed the casting decision aren’t likely to enjoy this anyway, so they shouldn’t waste their money. The average moviegoer should be comforted knowing they can be dazzled by the visual aspects of the film without being beholden to any kind of intellectual burden and it works as a family movie outing having been mostly stripped of its sexuality.