For most of us who grew up in the 90’s and early 2000’s, there was a good chance you got caught up in the phenomenon that was the Mighty Morphin Power Rangers.  From giant dinosaur robots to martial arts, the TV show, and all of it’s different iterations, had everything a kid under the age of 13 needed to be thoroughly entertained.  But the older I got, the more I understood that those attributes would never really hold up, and for the most part, I was right.  Whenever you talk about the Power Rangers as an adult, it’s more of a cheesy nostalgia that you can’t help but remember fondly.  That being said, there was no reason to think that this new “Power Rangers” movie was going to be anything more than a hollow, CGI-driven nostalgia machine, in a similar vein as what Michael Bay did with “Transformers.”  But a funny thing ended up happening.  As I sat in the theater trying to find reasons to hate this reboot, as I do with most reboots, I found it harder to do so the longer the movie went on.  Sure, there were lots of moments where the humor seemed forced and the cliches of the typical origin story were painfully apparent, but the one thing I really didn’t expect ended up being the best thing this movie has going for it- the characters win you over.

The funny thing is that this was a movie I shouldn’t have liked.  The plot was so basic and overused, you’ve seen it a million cliches before.  It even starts off with a laughable scene of Bryan Cranston as ancient Red Ranger Zordon, dressed up in awful alien make-up effects and speaking a made-up language, as rogue Green Ranger Rita Repulsa (Elizabeth Banks) stands over him and his fallen fellow Rangers, demanding to know where the all-powerful Zeo Crystal is.  The scene takes place in the Cenozoic Era, and the meteor that ultimately kills the dinosaurs is ordered to strike down on Rita from Zordon, and he buries the Power Coins, which give Rangers their power, right before the meteor strikes.  In the present day, five outcast teenagers mistakenly come across the Power Coins in a rock quarry, and begin to discover that they now have special abilities, just as Rita also awakens from her slumber, and Zordon, who’s consciousness has been uploaded into a hidden spaceship that is also uncovered, helps mentor them to become the new Power Rangers.  Everything about this simple set-up screams overplayed.  At the end of the day, the story is just decent enough to get by, and by no means is it even above average.

What the movie lacks in writing, it makes up for in the characters and the acting.  The fact that these are unknown actors are what gave the movie its heart.  You could tell that the five of them took this opportunity seriously, knowing this could be their big break, and their efforts showed.  The dynamic between Jason (Dacre Montgomery) and Billy (RJ Cyler) has loads of heart, as Cyler plays the first superhero on the autism spectrum, and Jason comes into a protective role over him.  There is humor that comes from Billy’s lack of understanding social cues, which hints that he specifically has Asperger’s, but it didn’t feel like the film was making fun, but rather, making him endearing to the audience.  Kimberly (Naomi Scott) is the other stand-out character, as she plays a former popular girl who struggles to face the awful things she has done as a part of that crowd, which has now shunned her.  Rounding out the team are rebellious Zack (Ludi Lin), who’s school truancy comes from him being his sick mother’s only caregiver, and Trini (Becky G), who plays the first gay superhero on screen, and struggles to find acceptance from her own family.  30 minutes into the movie, it becomes apparent that this is a character story, as most of the movie is spent getting to know why each of them, who don’t know each other, are disconnected with the rest of society. 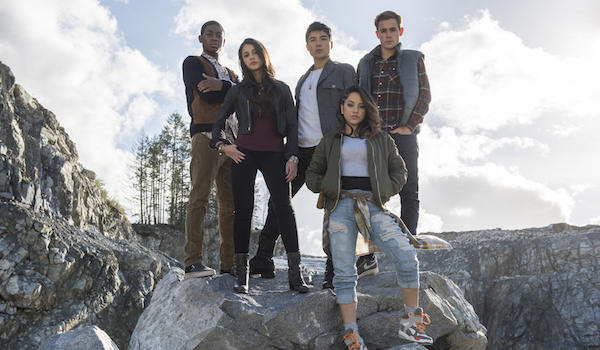 I eventually found myself caring about these characters, not as Power Rangers, given that they don’t even morph until the final 20 minutes, but as people who struggle with themselves.  In a scene that is reminiscent to “The Breakfast Club,” the five of them camp out and share those struggles with each other.  They endear themselves to the audience, so you believe that they really would go to bat for each other in the final battle, which delivered many of the crowd pops that fans of the old TV show were waiting for.  Even while each Ranger is piloting their Zords, each of them keeps their own face exposed in their suits, so as not to undo the connection we as the audience made to their characters.

If you saw director Dean Israelite’s previous film, “Project Almanac,” the way he shot “Power Rangers” was very reminiscent of the same style.  It also draws similarities to Josh Trank’s “Chronicle,” and while the movie isn’t a found-footage film, it uses a gritty, hand-held style to tell an origin story.  This technique makes the audience feel closer to the characters and what they are going through, putting us right into the struggle with them. 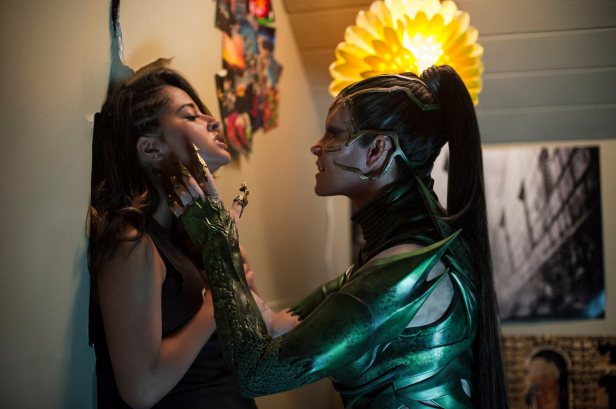 Elizabeth Bank’s Rita Repulsa ended up being the most over-the-top performance of the film, and while she does draw a horror-like aspect to her character, her dialogue and vocal performance took me out of almost every scene she was in.  Bill Hader voicing Alpha 5 could have stolen more of the movie, but minimum screen time hindered that.  Even Bryan Cranston played his part like the character he was given- a giant floating head, showing almost no personality, but was more of a big name acquisition.  This movie belonged to the five main characters, and their performances stood out even more amongst the big name actors who were clearly just trying to make a paycheck.

Overall, “Power Rangers” isn’t the greatest movie you’ll see this year, or even this month.  But through a dedicated, young cast, and a different tone that helped evolve the source material, it gives average moviegoers as well as fans of the TV show a new angle to see their beloved heroes, delivering an entertaining movie I recommend seeing, which is more than I can say for most big budget reboots.