Amid all the blood and chaos, a glaring lack of meaning shines through. Toeing the waters of horror, comedy and psychological thriller, The Belko Experiment fails to dive into any of those and leaves a sense of cluttered incompletion in its wake.

The setup is simple and straightforward. An office full of employees is trapped and forced into a psychological experiment in which they are forced to eliminate one another in order to survive. Blatantly derivative of Battle Royale, influences from The Purge and The Condemned can definitely be felt throughout. However, loftier social commentary like films about the Stanford prison experiment remained out of reach. Painfully unoriginal, the burden of success with a project like this was on the execution. It was never a matter of if these characters were going to die, only when and, most importantly, how. Creative kills are what the audience is there to see, similar to how The Walking Dead showcases new and inventive zombie kills week-by-week, and this movie missed the mark there as well. Sure, there were a couple good moments but the majority were completely uninspired.

Greg McLean directed this movie backed by a James Gunn script. McLean has his roots in horror as writer/director of the Wolf Creek franchise and Gunn has been in high demand since his success with Guardians of the Galaxy, so it seemed like a winning combination on paper. Unfortunately, the lack of character development inherent in the script left little for McLean to work with and the 88-minute runtime didn’t leave much room for it anyway. I’m hesitant to say that either of them did a poor job, but things just didn’t work out well.

The cast, on the other hand, is great. Marisol Roncali and Mary Vernieu have several high profile titles under their respective belts and that experience went a long way in casting a well rounded group filled with familiar faces and new talent. John Gallagher Jr. took the lead role as Mike, a mid-level management type in a short sleeve shirt with a tie. He does a good job playing the moral compass, as he usually does, but isn’t believable as the lead. Opposite Gallagher is Adria Arjona as Leandra, Mike’s girlfriend and round-about boss. She’s unarguably stunning and further undermine Gallagher’s believability as her love interest. More than just a pretty face, she put up a good showing with some attitude and her stock will probably rise the most from this movie.

The supporting cast is exceptional, with plenty of familiar faces, but a few stand out. Tony Goldwyn plays Barry Norris, the COO and seemingly well to do boss at the Bogota, Colombia branch of Belko Industries. In a pitch perfect performance, Goldwyn plays a magnificent asshole. A throwback to his loathsome character in Ghost. Alongside him is John C. McGinley playing the lecherous office pervert Wendell Dukes, instantly creepy and equally unlikeable as he lusts after Leandra. Rounding out the supporting triad is Michael Rooker. He plays Bud, a maintenance man mentoring a young and easily spooked apprentice. Rooker plays the good guy as easily as he does the villain, it’s just a shame he wasn’t utilized better in this film.

On the bright side, this movie is very well shot. Cinematographer Luis David Sansans did a particularly good job with framing. Almost the entirety of the film takes place inside this office building, but Sansans managed to maximize the visual aspects of the sets and avoid redundancy wherever possible. He also used a lot of really cool close-ups to break up the monotony of the office interior and identify each of the characters. In combination with the music selection, this makes for some well put together sequences. Tyler Bates had worked with Gunn previously on Guardians of the Galaxy, where the soundtrack was an essential element of the film’s success, so it’s no surprise why he was brought on. The use of familiar hits recorded in Spanish to overlay the action sequences created an entertaining juxtaposition. 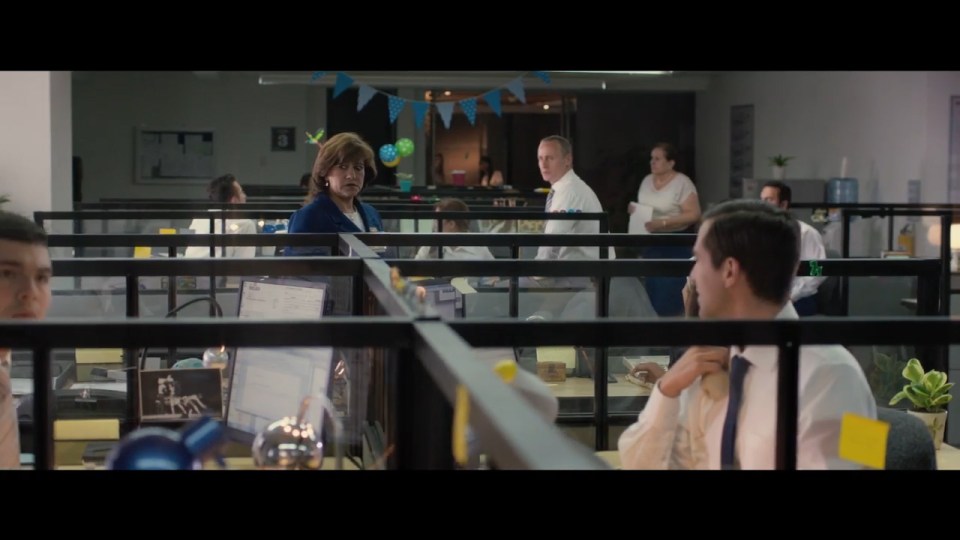 The special effects team under Daniel Cordero really had some fun here as well. The practical effects in some of the most graphic kill scenes were very well done. Unfortunately, the meat (pardon the pun) of the best effects work were buried by quick cuts made in the editing room rather than showcased.

Overall, it wasn’t terrible. I’ve seen plenty of worse offerings, especially in the horror genre, over the past decade. It just doesn’t play to its strengths and doesn’t offer anything in the way of resolution, leaving the audience to ponder why they just watched it.

Recommendation: Don’t waste your money on this one unless you can catch it at a discount. There are plenty of films, currently in theaters, worth checking out. If you’re really in the mood for a horror movie you haven’t seen, take a look at some of these offerings on streaming.