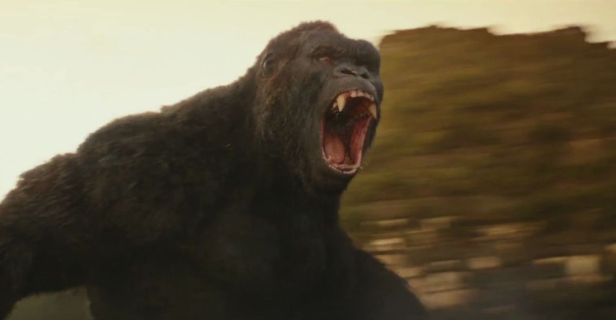 With an impressive cast brimming with A-list talent, ambitious plans for a shared universe with Godzilla and his monstrous foes, and a legendary history spanning a little over 8 decades, Kong: Skull Island is a film that really had a lot going for it.  The trailer alone sparked renewed interest in a franchise that had already been remade twice, once in 1976, and again in 2005, by teasing a much larger version of the legendary ape, along with a setting that resembled a gritty war film.  But as much momentum Skull Island had before I sat down in the theater, most of it faded the longer the movie went on.  Don’t get me wrong, though, these were by far the best giant monster action sequences I’ve seen in a long time, and I was actually very much a fan of the gritty angle set in the midst of the Vietnam War.  But, unfortunately, aesthetic does not trump writing, and this story failed to do the one thing every movie should strive to do- make me care.

It’s not like I didn’t care about the film walking in, or even 20 minutes in, only because it was refreshing to see a whole new angle on a story that’s been told for 84 years that doesn’t end with an attractive blonde girl on top of the Empire State Building.  It was even more exciting for me to catch all the Godzilla easter eggs, starting with John Goodman’s Bill Randa putting together an expedition on behalf of the giant monster-research company, MONARCH, to explore a previously uncharted island in the South Pacific in 1973.  After Randa gains approval for the plight, he assembles a team of soldiers on the cusp of coming home from Vietnam, led by the hard-as-nails Colonel Packard (Samuel L. Jackson), a world-class tracker Conrad (Tom Hiddleston), and photojournalist Mason Weaver (Brie Larson).  As they close in on the island, the fireworks begin as their helicopters are attacked by Kong, splitting up the team, and giving them only 3 days to trek to the other side of the monster-infested island to rendezvous with their ride out of there. 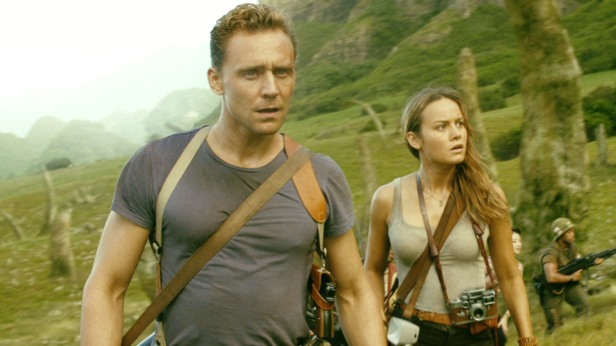 In the midst of all the perilous action and disaster, the film’s attempts at humor had a hard time landing, as the only thing that’s funny in the whole movie is the dialogue, and believe me, it’s unintended.  But the film’s only real humor comes from John C. Reilly’s Lt. Marlow, who was shot down over the island during WWII, and has been stranded there for 28 years.  Reilly is the most charming character in the movie, and is really the only character I was rooting for to get off the island, thanks in part to some endearing character development I actually cared about.  But I struggled to find similar traits in the rest of the characters, which was disappointing considering the talented cast.  Tom Hiddleston’s Conrad was a throwback to the square-jawed adventure heroes of the 1940’s serials, which he sold well with his demeanor, but showed the least amount of motivations and personality.  Brie Larson, fresh off of a Best Actress Oscar, spent most of the movie looking upwards wide-eyed and came off more as a concerned animal activist instead of establishing any real connections.  This is one of the biggest problems of the film, which is the criminal under utilization of its cast, especially John Goodman, who I couldn’t figure out if I should like or dislike, and Toby Kebbell, who built up a character that could have stolen the show, but ended up with a role that had the least amount of significance to the story.  Sam Jackson made a great “Ahab” to Kong’s “Moby Dick,” but that obsession was never truly explored enough to carry weight.  It looked like getting the audience to care about these people was never the priority, and their inclusion was just a formality. 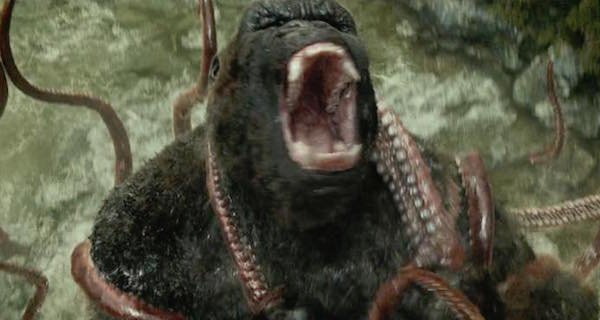 The only real fun in the film came with the highly satisfying fight sequences, as it introduced a rival monster that instilled legitimate fear in the audience.  Kong, in this movie, is a very sympathetic character, and I cared about him more than any of the humans.  He’s easy to root for, given the established backstory and sense of duty he portrays as the island’s “guardian.”  The final fight sequence pays off tremendously, as it gives us a glimpse of CGI that is at it’s most convincing.  Even the overlying theme of man’s intrusion of nature is a great angle to approach the story, making Kong a character we can all get behind.

Skull Island could have been much better than what it ultimately became.  Equipped with a great conceptual mythos, good theme, and an amazingly talented cast, the only thing the film did right was give us the best fight sequences we’ve seen in any King Kong movie.  As it is ironically consistent with the film’s theme, the humans are the worst part of the film, making it clear that the only reason this movie exists is to enhance the future of Legendary Pictures’ Monster-verse, instead of trying to build itself up as a great stand-alone film.