Finally unencumbered by the PG-13 X-Men franchise, Logan is the quintessential Wolverine experience. Visceral, bloody and raw. This isn’t a superhero movie, let alone one of the more cartoonish offerings the franchise has put forward. It’s a western…thematically rich in family, duty and justice. Knowing beforehand that this would be Hugh Jackman’s final portrayal of that iconic character, there was a lot at stake. With the exception of the newly minted Deadpool (2016) franchise, Wolverine is the only X-man to receive his own film so finishing strong was of the utmost importance.

James Mangold had directed several gritty, character driven films focusing on the importance of choices and relationships, which I really enjoyed (3:10 to Yuma, Cop Land, and Walk the Line). He managed to steer the most endeared X-Men character in the right direction with The Wolverine (2013) after an abysmal X-Men Origins: Wolverine (2009) and X-Men: The Last Stand nearly submarined the entire mutant franchise. He came up with the story (loosely based on the Old Man Logan character from the comics) and helped pen the screenplay alongside Scott Frank (again) and Michael Green, finally bringing some much needed continuity to a character who has been in all nine X-related movie offerings. However, it did still feel like something was missing. The audience is (re)introduced to the character in the distant future, 2029 to be exact. The mutant population is, more or less, non-existent and Logan works as a Uber/limousine driver while taking care of an aging and debilitated Professor Xavier in seclusion. With the aid of mutant tracker Caliban, they watch over the professor while trying to scratch together enough money to buy a boat and finally escape their pasts and live in peace. Before too long, a woman discovers who Logan really is and begs him to escort her and a young girl safely to the Canadian border. That is basically where this story really begins.

This is a much different Logan than we have ever seen. Weathered by the repeated tragedies of life and the decline of his signature healing factor, he’s turned to the bottle as a coping mechanism. Jackman has played this character in some form or another for more than 15-years, so his portrayal seems a natural progression…authentic. The only real issue I had was the disconnect between the character we know and the one we’re meeting. The events that led to the present are implied, but don’t explain Logan’s lack of empathy. He was always bighearted and protective, especially with the ladies (Rogue, Jean, Mariko and Yukio) and even now with Charles. So, something seems out of place considering his hesitancy to help this young girl Laura.

Jackman was really at his best here. There’s a lot to be said for experience and he put it all on the table. Tormented and tortured by his past, he wears it proudly, encompassing all the different ways he’s played the character over the years. It actually brings him full circle, all the way back to the Logan we met at the beginning of the very first X-Men (2000), it’s actually mentioned during a conversation he has with Charles in this film. Speaking of Charles, this is by the far the most enjoyable Professor Xavier I’ve ever seen. Let’s not forget Sir Patrick Stewart has been playing Charles just as long as Jackman has Wolverine, so it’s only fitting for them to be paired for one final ride. It was incredibly refreshing to see Stewart let loose, ditching the traditionally prim and proper professor (he clearly had a lot of fun with the character and the F-bomb laced dialogue). Humanizing one of the most powerful people on the planet isn’t easy, but he accomplished it splendidly. Old and feeble, locked away in isolation and going a bit insane, the vulnerability of Charles that really brought him to life and connected him to the audience. The relationship between these two and the journey they have been on for 17 years really shines through and gives this film its heart.

It seems like the rest of the supporting cast knew what was at stake here and brought their respective A-games. Lisa Beach and Sarah Katzman did a terrific job casting this picture, picking talent all across the spectrum and showcasing a future star in Dafne Keen. She plays the young girl, Laura, who Logan is tasked with escorting. Commanding on screen, she manages to steal a fair amount of the scenes she’s in and holds her own alongside Hollywood veterans with ease. Keen will be getting plenty of offers thrown her way in the future and most likely already has a few contracts in place after the undeniable success of this film…of which she is a central part.

Stephen Merchant, known for his comedy styling alongside Ricky Gervais, really brought a lot to his role as Caliban. Caught between his responsibility and fearfulness, he captures that space well. Measured and acting as the voice of reason, he reminded me of a mutant C-3P0 for some reason. Boyd Holbrook had a star making performance in his own right as Pierce. Something of a private security bounty hunter, he is also looking for Laura and has no patience for Logan. His southern drawl equally charming and menacing, but undeniably watchable. His time on screen begs for confrontation, making the audience love to hate him. Holbrook will get a lot of work after this. Eriq La Salle popped up in film playing a back-against-the-wall corn farmer, and father, who cross paths with Logan on the highway and form an connection. His character also serves as a bit of social commentary on the government subsidized corn industry in the United States.

Marco Beltrami did a fantastic job creating the original score. Upon first hearing it, I immediately thought of Moon (2009) which Clint Mansell scored. The sharp, slow piano notes puncture and hang there waiting to be taken in before moving on. It’s really quite beautiful and fitting for a film like this. Peter Lando did a great job with the set decoration, especially early on, as the living quarters were crafted very well and felt true. Chris Farmer, supervising art director, also did a good job with continuity in the aesthetics. Not to be overshadowed, the makeup department did a phenomenal job. From the numerous scars covering Logan’s body to the open, leaking wounds he sustains during battle to the subtlety of Charles’s skin, they were absolutely on top of their games. 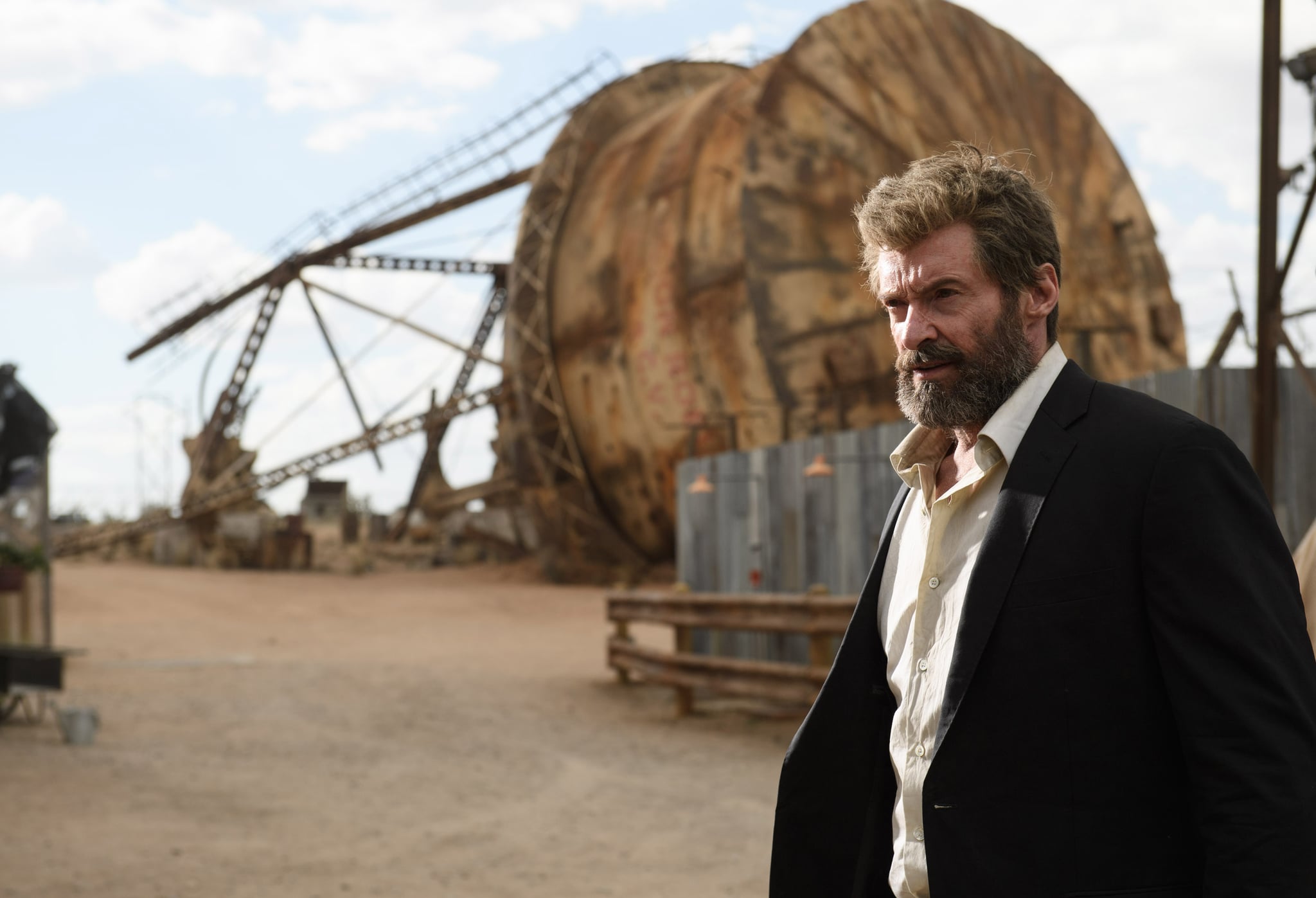 The location management team and locations scouts did a good job finding some visually appealing locations to film. Although the setting is somewhere near the Mexican/American border, I don’t recall any specific location and I think that’s kind of the point. Just another innocuous border town in 2029. Last but absolutely not least, this wouldn’t be a Wolverine movie without action sequences and the stunt department deserves a lot of credit. From the fight choreography to the car chases sequences, the action is very thought out and deliberate. A departure from other superhero films that use the action as a distraction rather than a complement to the film itself. Across the board the movie was well made and there is no glaring weakness. I’ve heard critics claiming it could be the first superhero film to get nominated for Best Picture at the Academy Awards. That remains to be seen. However, I think this is the best X-Men film in the franchise and certainly stacks up well against some of the more respected superhero films of all time. The roughly $90-million opening weekend was a great start and recouped almost the entire project’s budget. Heading into week two, it will have some competition with Kong: Skull Island.

Recommendation: Go see it if you’re a fan of the character, the franchise, the X-Men, Marvel, or westerns. If you are squeamish and have a hard time with blood or an aversion to the F word, this one isn’t for you. I saw a lot of young children in the theater when I watched this. Now, the language and graphic violence aren’t necessarily disqualifiers, but I don’t think parents would be taking their kids to see John Wick 2 and I’ll just leave it at that.