The true story of three young black women working their respective ways up the ladder at NASA during the height of the civil rights movement is a remarkable one. At the same time, the United States was embroiled in the Space Race with Russia. Both nations were racing to gain control of the latest frontier and the US had fallen behind. In order to close the gap, officials at NASA opened the doors to three African American mathematicians working as computers for low level data entry.

Theodore Melfi directed and co-wrote the adapted screenplay for alongside Allison Schroeder, based on the book by Margot Lee Shetterly. The film is paced very well and balanced between the three main characters and the higher ups at NASA. There is a lot of story to tell, but Melfi kept things on track by unifying the characters around a singular goal. Dialogue throughout the film is poignant and driven, strategically etching important plot points without redundancies. 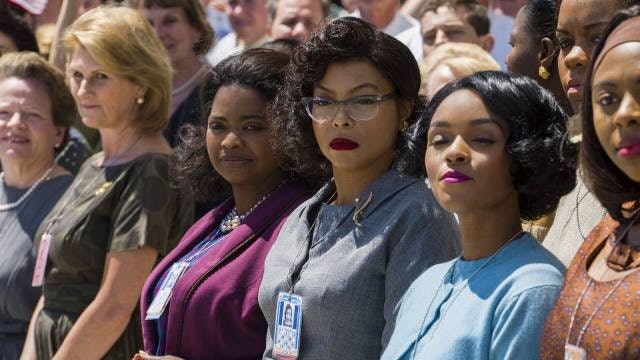 Katherine Johnson is the central character of the three, played by Taraji P. Henson. While all three of these women embark on their own parallel story arcs, Johnson’s work is clearly at the forefront of the project. Henson embodies all the fragility and strength of a woman at the precipice of not only the Space Race but the Civil Rights movement. She is flanked on both sides by Octavia Spencer and Janelle Monáe, playing Dorothy Vaughn and Mary Jackson respectively. Spencer is up for Best Supporting Actress at the Academy Awards for her portrayal. She serves as a kind of mother figure, protective and supportive. Her story leads her down a path of self sufficiency and discovery guided by work ethic and an unwillingness to be replaced. Monáe delivers a fun and spunky performance with a good sense of humor, a departure from her role in Moonlight. Kevin Costner brings a strong veteran gravitas to the movie as NASA Space Task Group director Al Harrison.

With an aggressive marketing campaign after its initial release, the movie has gained a lot of momentum and garnered significant box office success for a reason. Renee Ehrlich Kalfus breathed life into the period piece with her costume design. She did a great job reflecting societal roles through the outfits and marked a bland, unassuming consistency among the men working for NASA. Benjamin Wallfisch, Pharrell Williams, and Hans Zimmer teamed up to do the music. Although the score worked well with the film, the music supervision felt a bit off. Missy Parker had a tall order as Set Decorator. Pulling off a convincing NASA workspace from the 1960s wasn’t easy, but it worked well and felt very much authentic.

Recommendation: If you’re a fan of history or, more accurately, the history of space exploration and civil rights, then this one is right up your alley. There is character and heart layered throughout the historical context. Storytelling is the spine of this film. Heartwarming and inspiring, steeped in both personal responsibility and dedication.