My general rule of thumb when it comes to movies I want to see: The better the trailer, the worse the movie. They usually end up landing somewhere between lofty expectation and utter failure, but always leave me with a sense of undeniable disappointment. The phrase, ‘I should have known better’, lingering in my head. Sadly, but not surprisingly, Passengers was the rule and not the exception.

The original trailer looked very promising. A space thriller with some kind of sinister or unexpected twist waiting for the audience at the end. Spoiler Alert…there is none of that. Why the trailer sold that idea becomes painfully obvious once you’ve seen the film. I think the studio needed to drum up interest in an otherwise stale story arc and sold a false narrative to drive box office sales. A love story set on a spaceship en route to a new planet colony 120 years away carries much less mass appeal than an exciting Sci-Fi thriller.

I have read some other critics’ reviews and many claim the film’s saving grace is the chemistry between Chris Pratt and Jennifer Lawrence. For anyone who has seen this movie and thinks those two have good on-screen chemistry, sorry but they absolutely don’t. They have all the chemistry of Eyes Wide Shut without the awkward real life parallel to lean on. Let’s start with the obvious audience pandering in these casting choices. Lawrence and Pratt have built in fan bases and legions of loyal fans. However, they were simply bad choices for this film. I recently praised Francine Maisler for her work on Nocturnal Animals. However, in this case her choice for lead roles was transparently uninspired. Laurence Fishburne and Michael Sheen were well cast and brought much more to the table, but weren’t utilized nearly enough. Sheen is probably the best character in the movie and he plays a robot bartender. 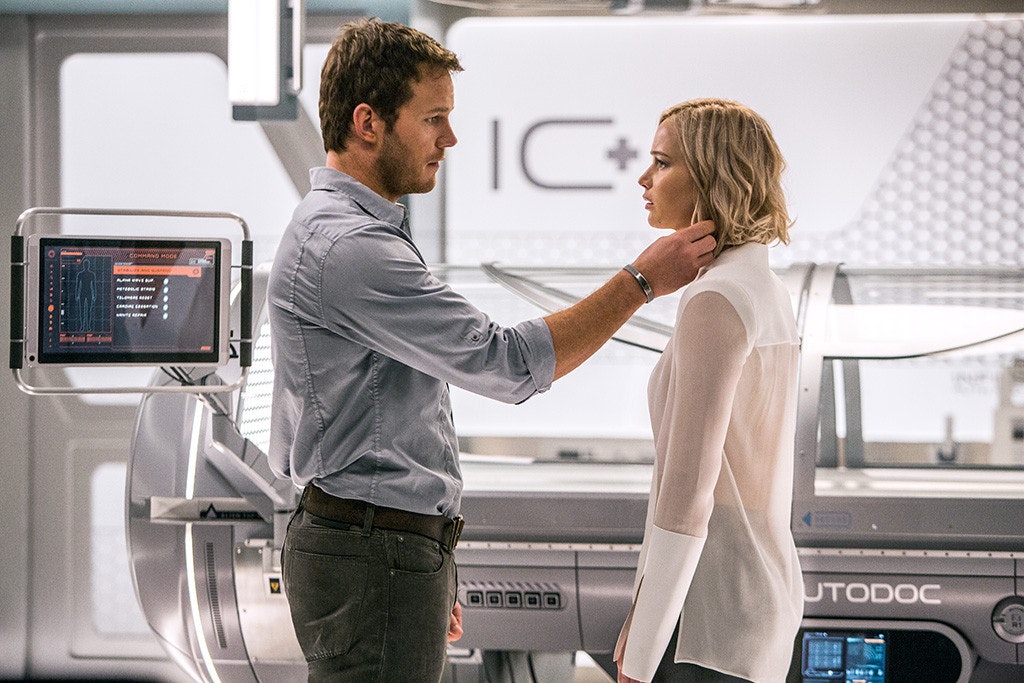 Congratulation to Jennifer Lawrence and Chris Pratt for leveraging their star power into sizable paydays though. They were saddled with a sub-par story and tasked with and bringing more to the characters than the writing was able to provide. It was far from the best work I’ve seen from either of them. In fact, I would have actually liked to see their roles inverted. Lawrence has the acting chops to carry the film by herself for a while and Pratt’s comedic chops and boyish charm would have been a nice injection to her otherwise manic drive. Both Jurassic World and now Passengers have tried in vain to recapture the dynamic charisma Pratt displayed in Guardians of the Galaxy.

I think this detailed plot synopsis hits the nail in the coffin, directly on the head. Complete Plot Synopsis. Jon Spaihts takes the writing credits and much of the blame on this one. He showed a good knack for storytelling with The Darkest Hour (2011) and really made me a fan with Prometheus (2012) but Doctor Strange (2016) left much to be desired from a story standpoint. Morten Tyldum was relatively unknown on the American stage until The Imitation Game (2014) but he was nominated for an Academy Award for it. With that kind of recognition comes the chance to take on some more mainstream endeavors, unfortunately it just didn’t come together. The themes of love, loneliness, and betrayal are undercut by mostly unsympathetic characters and he should have recognized this early on. Then again, Tyldum got a large bump in pay on the project himself. The whole thing just felt mailed-in.

There were some bright spots in the film and it’s only fair to point those out as well. The Art Direction team did a fantastic job creating an aesthetic that was beautiful and believable. Set design is always one of the hardest but most crucial elements of making a convincing Sci-Fi film and Gene Serdena truly delivered. The sets were phenomenal and unquestionably the star of this movie. The atmosphere presented the audience with some eye candy, but it’s mostly a facade. Pretty on the outside but hollow on the inside.

Recommendation: I wouldn’t recommend spending time or money watching this movie. I did both, and while I wouldn’t go as far as to say I regret it, I did leave the theater feeling duped. If you have exhausted all your other options in theaters, maybe give this one a shot if you’re desperate. The production value is evident, but that’s about it.