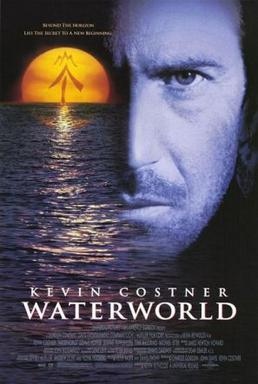 Kevin Costner movies are usually a bit of hit or miss in my experience. People seem to love Field of Dreams, but I never really got that movie. My taste leans towards stuff like Tin Cup and Mr. Brooks. Films where Costner’s performance is the strongest aspect. Waterworld is most definitely one of those movies. Set in a post-apocalyptic future, like so many of my favorites, it’s ambition was rivaled only by its failure at the box office.

At its time, it was the most expensive film ever produced. Without CGI, the entirety of the complex sets had to be meticulously crafted and functional for a movie shot mostly on the water. It received an Oscar nomination for Best Sound, but in many subsequent viewings, I still wouldn’t say the sound was anything that stood out. The costume and set design, on the other hand, are unique and original. The problem, I think, is they both look like trash. Literally. The imagery of the post apocalyptic ocean-scape is one of scavenged materials. As much time and effort went into the designs, they were most likely overlooked for lack of appealing style. The special effects and stunt work were also quite good featuring legitimate pyrotechnics and complicated choreography. Those elements of the film were so good in fact, a tie-in live action stunt show was added to Universal Studios theme parks around the world. I can attest, it’s quite entertaining and still currently on the show schedule.

In the wasteland that is this movie’s future, the polar ice caps have melted sometime in the 21st century and made the globe a complete ocean. What’s left of the world strings together some very poorly constructed floating towns and survive by scavenging and bartering. Costner, a mutant known only as the Mariner, shows up and gets entangled in a struggle between those trying to survive together and those trying to take control of whatever is left, the Smokers. Led in a very strong performance from the always entertaining Dennis Hopper as Deacon (may he rest in peace), the smokers have access to what is left of Earth’s oil and aren’t afraid to utilize it in their pursuit of dominance.

Long before the conversations about global warming or climate change hit the mainstream media, the subtext of the movie seems to speak to concerns about our reliance on fossil fuel, how we use it. Hopper’s villain, Deacon, rides around on what is left of the Exxon Valdez, fueling his planes, boats and jet skis in his endless pursuit to find and conquer dry land. And he’s afraid to kill, pillage, rape and torture along the way. David Twothy seemingly had some social commentary in mind when he penned the screenplay. Sadly, most of that fell victim to circumstance. With Hollywood constantly looking to rework, reboot, remake and reinvent movies from the past, Waterworld seems like it would fit the bill for the current atmosphere.

Only two movies left, make sure to check back tomorrow.